The balloons on the tank at the start of Ash’s season 15 solos show gives a big hint why this show is special. It’s been over five years since Ash wondered into the world of Gunge and Pies with the Splat! Show. After going head to head against Kyle earlier in the season Ash stars in this, his solo show for season 15. Ash again goes against the Gunge Tank he designed and built and gets very VERY messy. We think Ash loves getting gunged in the thing he created and this show features some brand new games too including tied and tank and also features Ash taking on the Splat! Rack. Featuring great games and some great colourful gungings, you would be crazy to pass on this show!

Ash’s Yellow Gunging Interview: We catch up with Ash and talk to him about how he felt his last show with Kyle went before taking a step into his very own Gunge Tank to continue to interview and face some very bright and very thick gunge when the timer ends!

The Splat! Rack: This season we have put all our legacy models on the tortuous Splat! Rack. Want to know a secret? Ash loves being tied up, he told us and his girlfriend also told us too so it was interesting seeing Ash on the Splat! Rack. Ash is treated to some very thick and fluffy pies on the Splat! Rack and also some custard down his brand new singlet too! Ash is sent to the Gunge Tank after coming off the Splat! Rack after failing to get more questions right than wrong for a few thick, bright Gunge bucket throws and a foaming!

Tied and Tanked: Taking the bondage level to this next game, Ash takes on the new Tied and Tank. It’s basically what the title suggests it is. Ash is tied to the chair in the tank with a tank of full thick, multi-coloured gunge poised above his head. Get more wrong than right then the tank will unleash! Of course he failed and we couldn’t resist throwing even more mess his way after the tanking including foam, gunge throws and a watery foam tanking too!

The Panic Button: In this brand new game Ash has to avoid the Panic button. After he gets a question wrong he has to pick one of four buzzers. Two have messy forfeits and two are safe. Can Ash get through the ten questions before he pushes the panic button? A FULL tank of blue and pink THICK gunge is waiting in the tank! There is also a second tanking in this game and also a few pies too!

Formal Gunging: One thing that many of you have asked for is some non-lycra, formal and smart clothes for the models to wear. We gave Ash the chance to wear his best clothes ONLY if we agreed that if he got the killer question right he could walk from the Gunge Tank clean. Ash obviously thought he would do ok with one killer question and agreed…will Ash’s best clothes get a tanking!? A fitting way to end his Season 15 show! 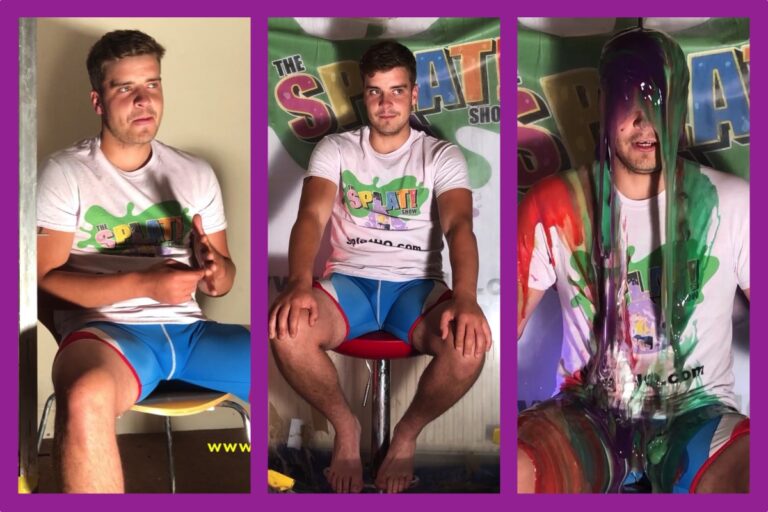 Splat! Special: Ash’s Rainbow Justice: Ash lives where The Splat! Show is filmed, so he is never far away from The Gunge Tank. That’s great and all but it also means the pressure is on to be a good housemate. Ash gets summoned to the tank for some household justice. It pays to be a good housemate Ash. 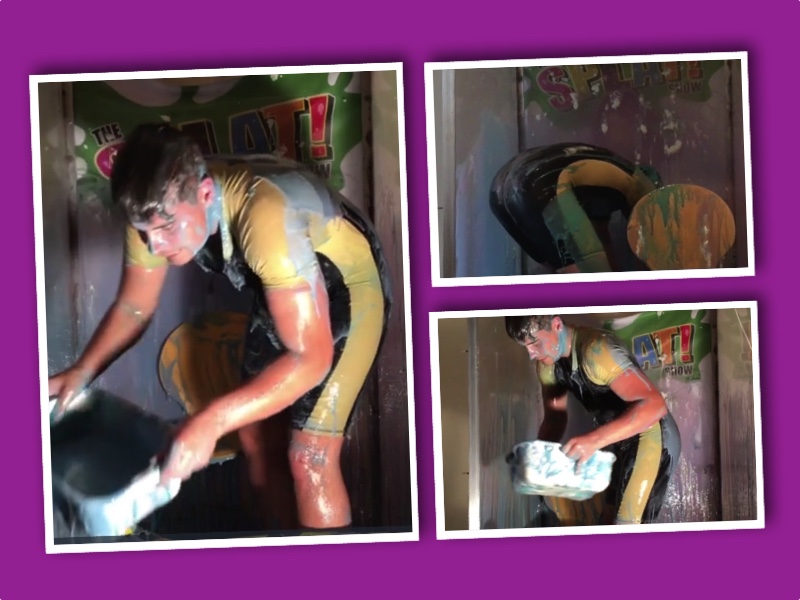 View the cut footage from Ash’s s15 Splatter. Featuring clean downs, cut footage and other bits that didn’t make it into the show edit.