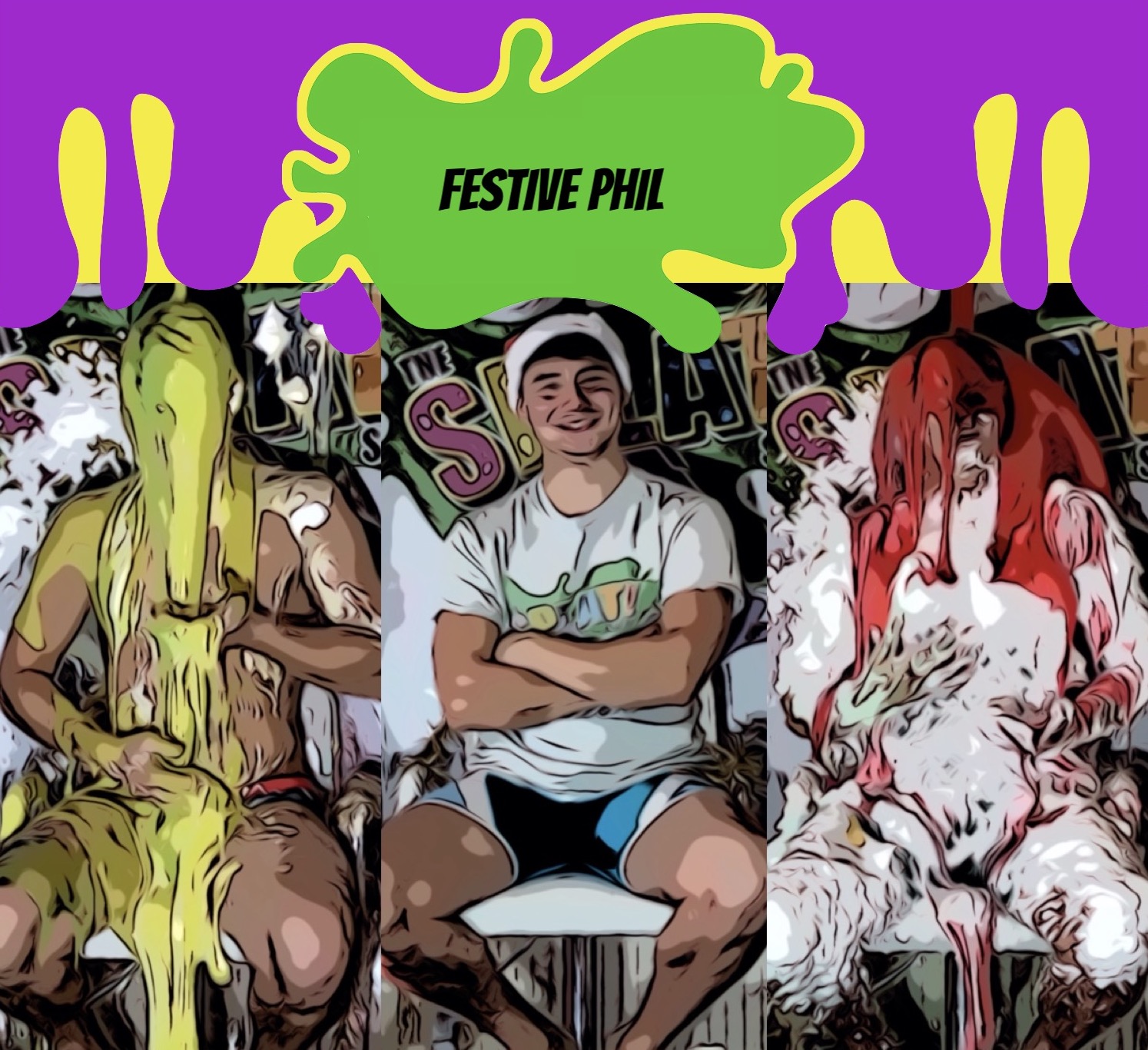 Ah Christmas. A wonderful time of year and we here at The Splat! Show love to celebrate the festive season with a Christmas themed Splat! Show. We start to think about who we want to star in our Christmas specials during the summer months and then get the process moving. Nearly always we want to feature a guest who has already shot with us and this year was no different.

Phil told us that he loves Christmas and is one of his favourite times of the year. So, did we ruin Christmas for Phil after filming this Christmas Splat! Show? Of course not, but we don’t think Christmas has ever been as messy as this for Phil!

We really hope you enjoy our Christmas 2019 special and watching Phil’s return to The Splat! Show. We would like to wish all our viewers and fans a very Happy Christmas!

Christmas Hero Phil Saves The Icon’s Of Christmas: Phil turned up to find a huge plastic box wrapped in Christmas paper. Of course it was the tank. We interview Phil outside the Gunge Tank before the shoot gets underway to catch up with what has been going with Phil since his last appearance with us over a year ago. After the interview, we invite Phil to unwrap the Gunge Tank. Phil then finds Santa and a Snowman sitting in The Gunge Tank Hot seat. Will Phil gunge the Icon’s of Christmas or will he take their place and be the Christmas Hero? 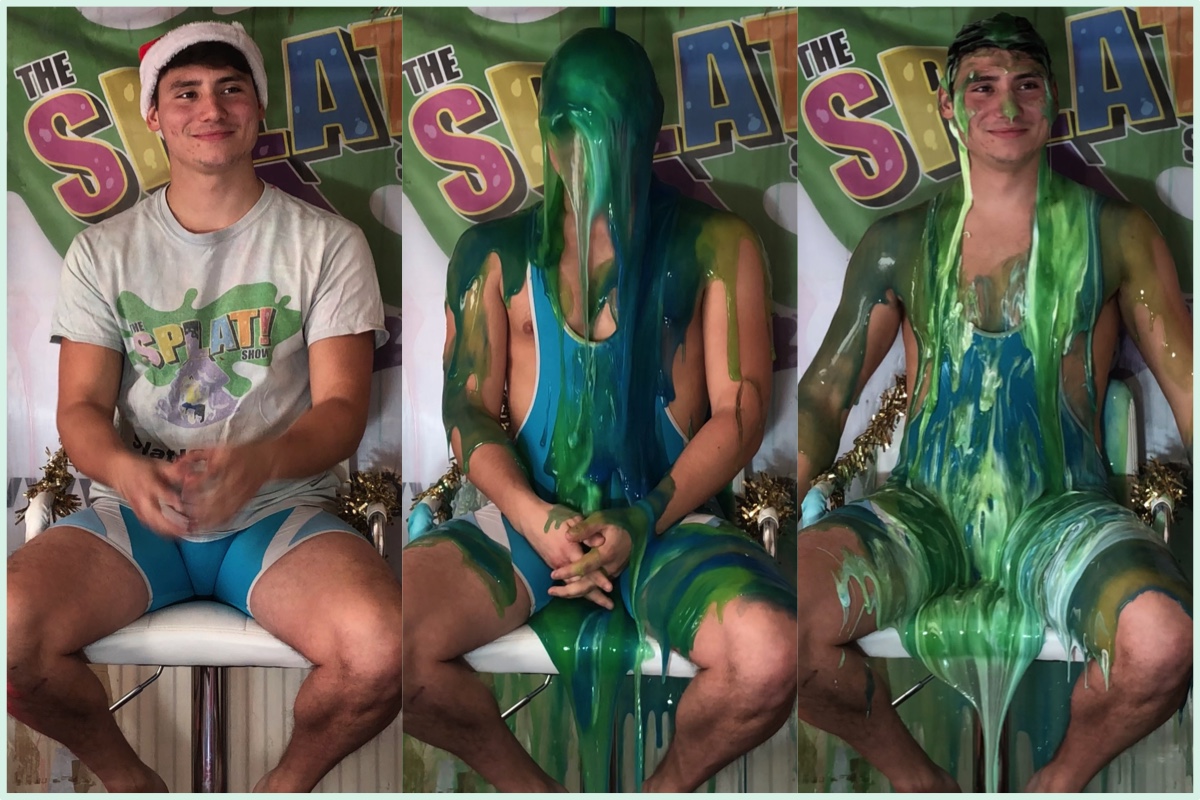 The Splat! Christmas Blizzard Quiz: Phil loves Christmas, but is his Christmas general knowledge quiz up to scratch? In the first quiz of the show, Phil takes on a Christmas edition of Foam Me Up. But as it’s Christmas, we added more snow (foam) than usual. We admit these questions about Christmas were tough, but we wouldn’t of thought Mr Christmas Phil would’ve done better. Phil soon disappeared under the snow and is not seen again until a colourful Christmas Gunging cleared the snow away. 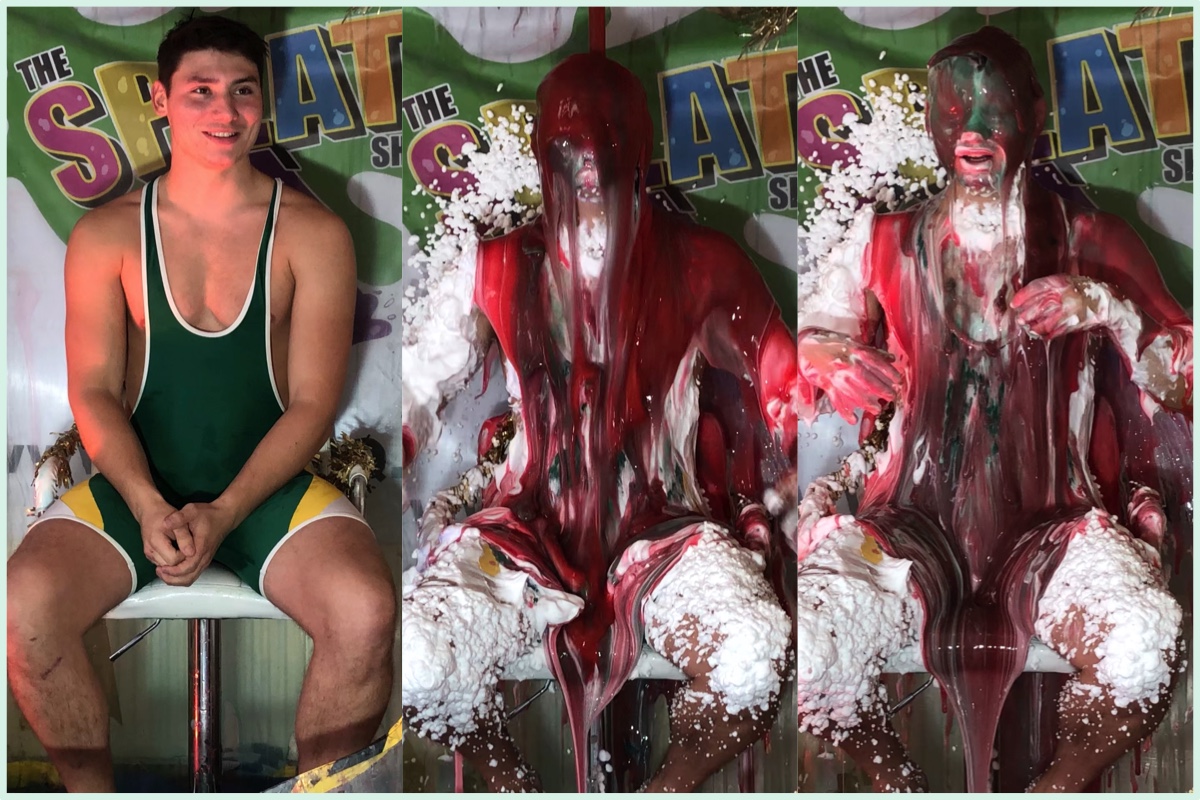 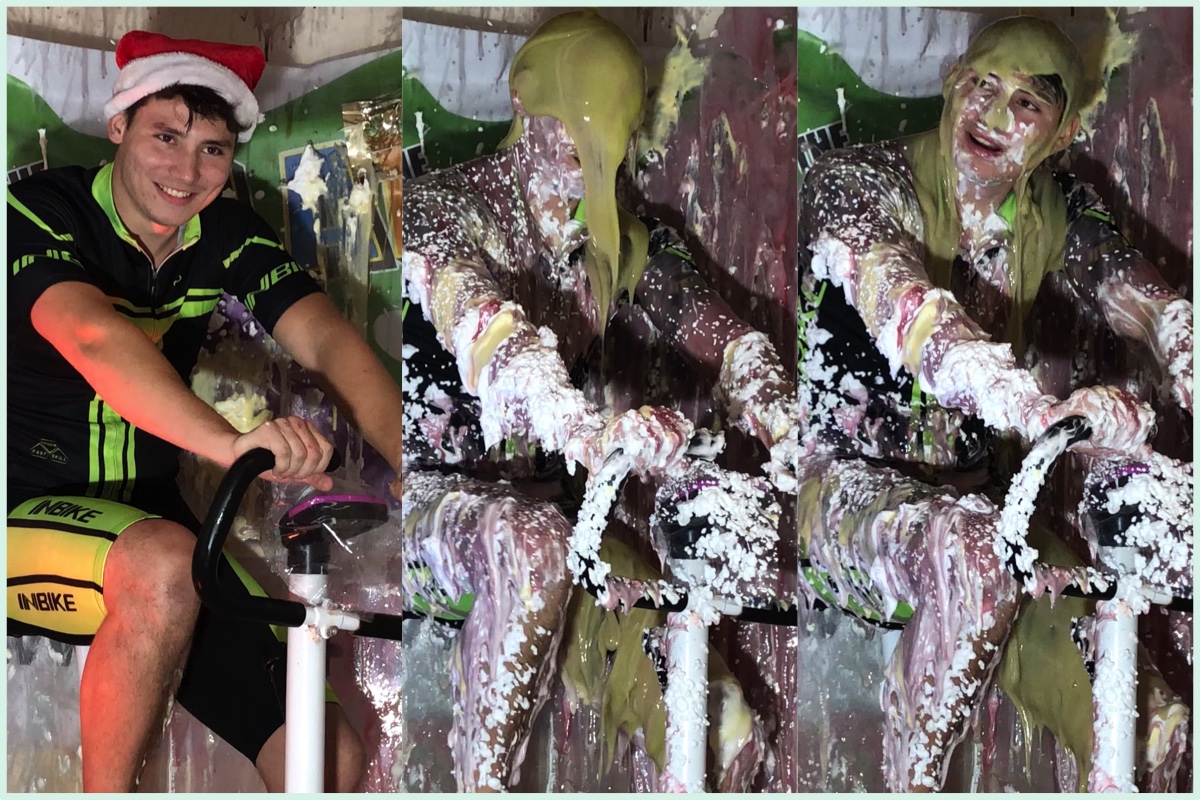 The Easy Christmas Quiz: The second and final quiz featured in this Christmas special features what we would say were much easier Christmas themed questions. It really seems like Phil needs to brush up his Christmas knowledge because the custard pie barrage was relentless and also failed to stop the tank from drenching him in yellow, eggnog Gunge! 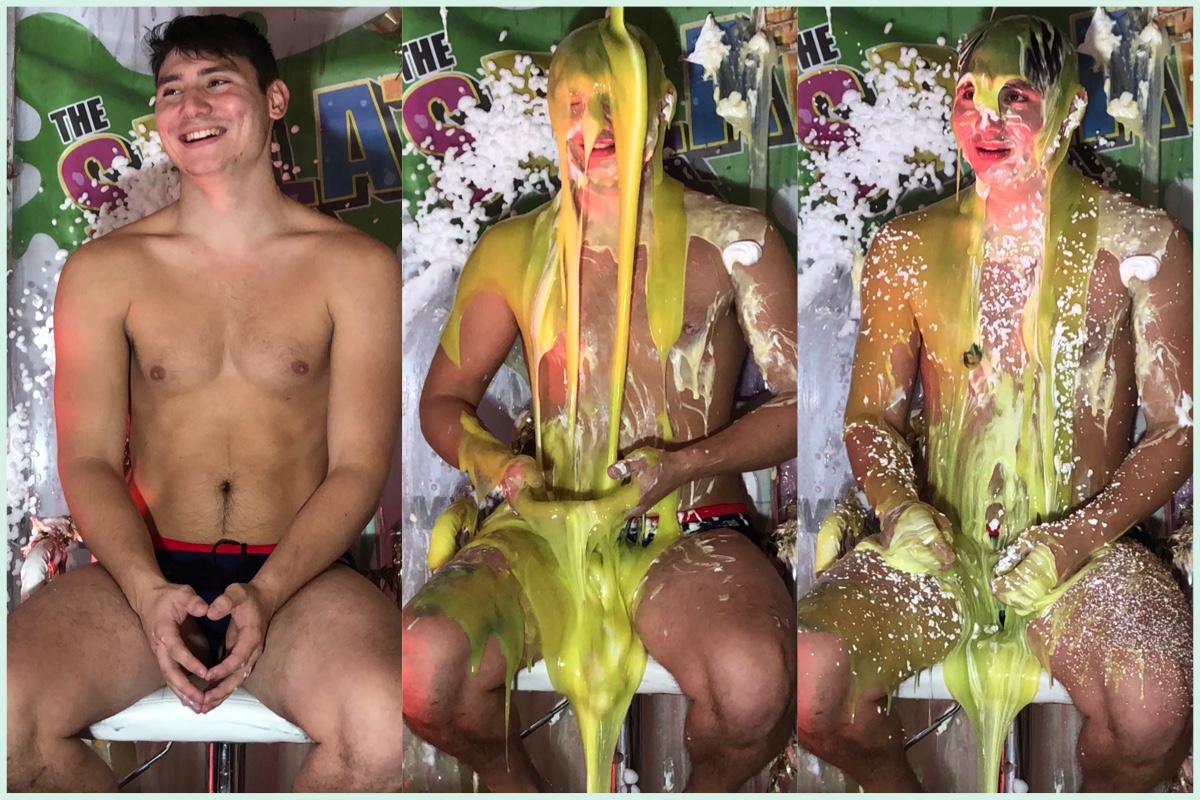 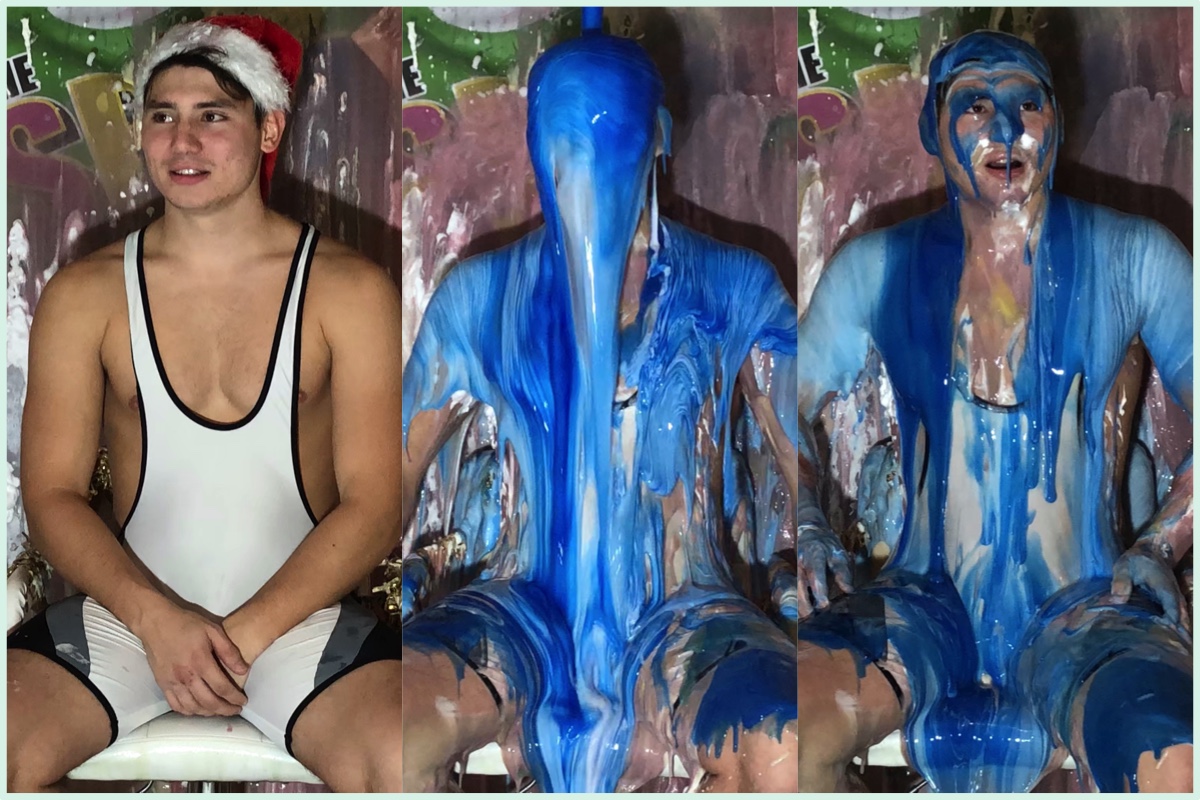 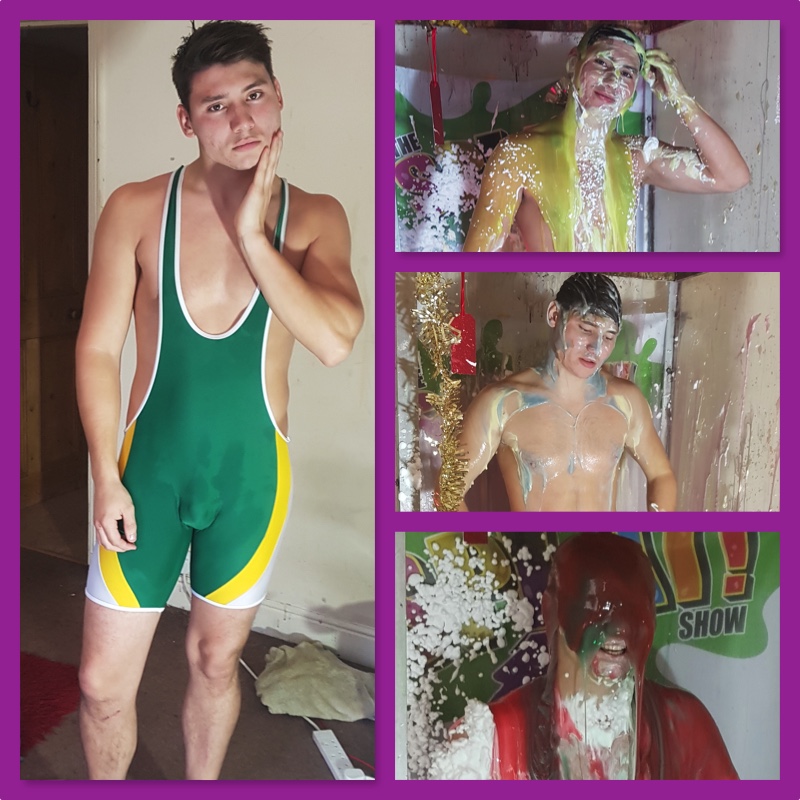 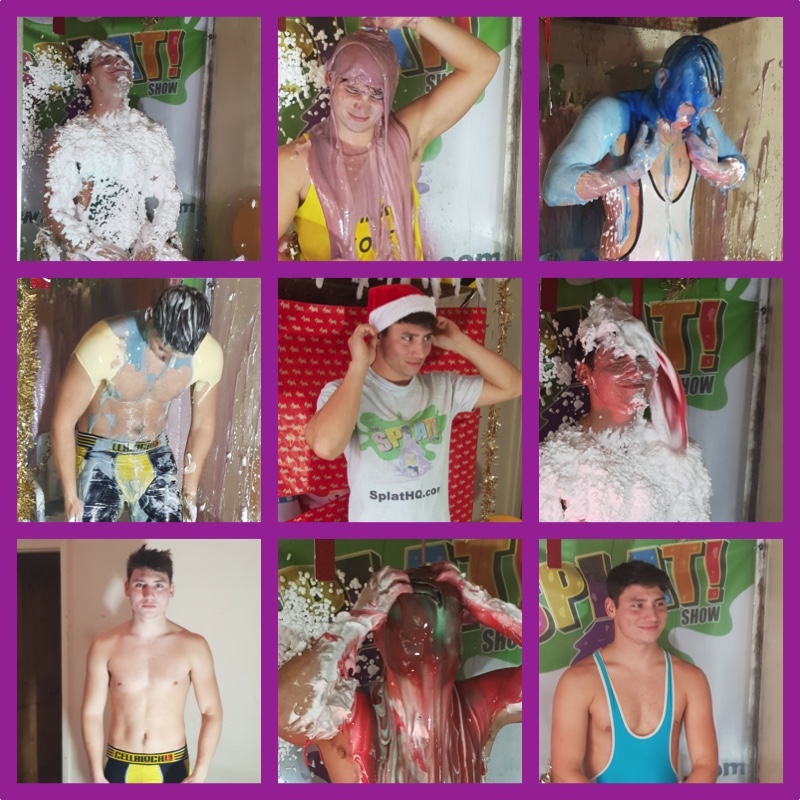 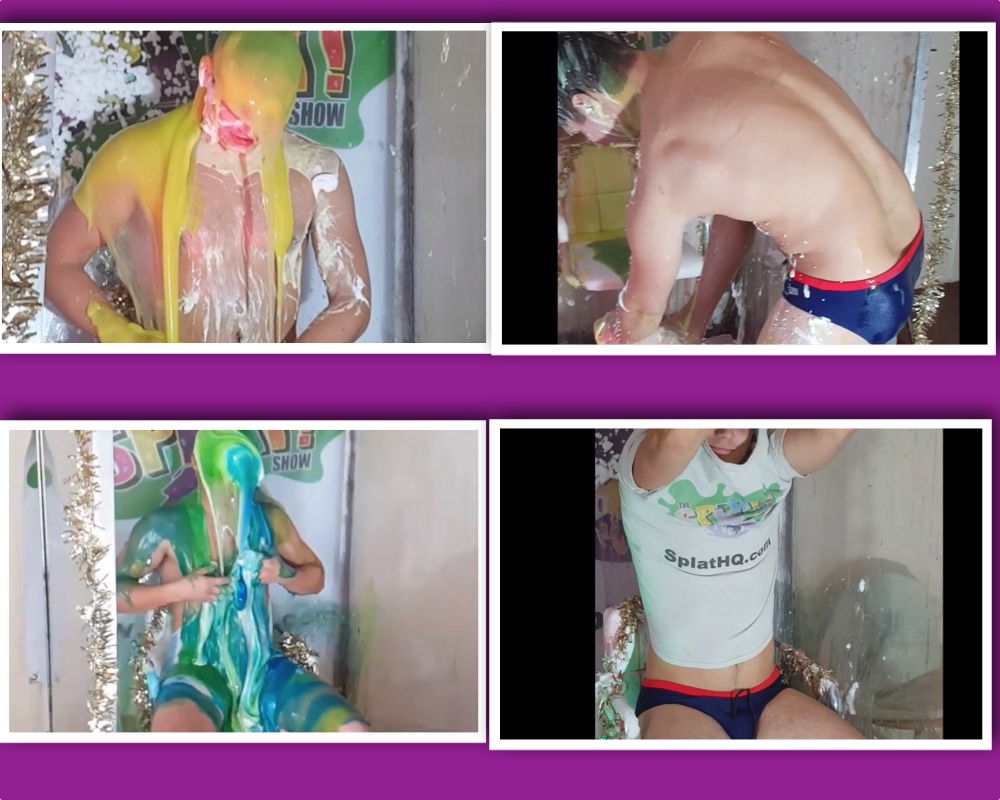 View the fan cam footage from the Festive Phil Shoot. Fan Cam footage is shot on a handheld camera and gives you new angles at some of the action from the shoot. Mainly used for different Gunging angles but includes other elements too. This footage is not featured in the main release and can only be viewed on The Splat! Fan Club. 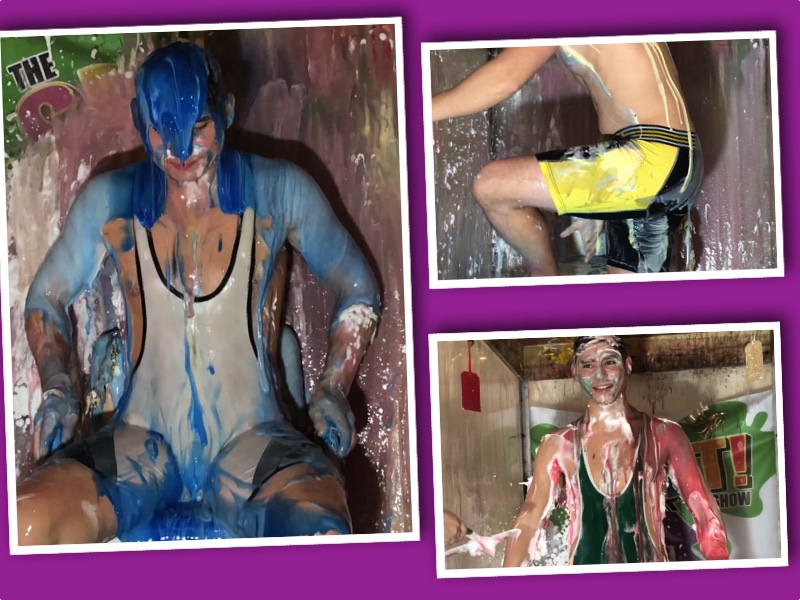 View the cut footage from the Festive Phil Shoot. Featuring clean downs, cut footage and other bits that didn’t make it into the show edit.

Necessity is the mother of invention they say and, whoever “they” are, have clearly seen how we plan and shoot the Splat Show. Today was one of those days where we had a FANTASTIC plan…. and promptly threw it out of the window.  I’m not saying that nothing went as planned today but anyone who was watching on the live feed will have seen a lot of improvisation going on (well, until I tripped over it and accidentally stopped it!).  Know what though?  When the star of the show is the fantastic Phil, it doesn’t matter how chaotic things go, you know you’re on to a winner.

Check Out Phil's Other Splat! Shows...

You Plan The Show - We Will Shoot It!

We are pleased to offer a new feature along side our private experience packages, enabling you to create your own Splat! Show starring any of our Splat! Stars.

Maybe you don’t want to star in your own Splat! Show at a private experience, but maybe you want one of our Splat! Stars to feature in a show that you, yourself has planned instead. Well Splat! Custom’s are for you.

What Is Splat! Custom?

With Splat! Custom you are the producer and director. You provide us with ideas and suggestions you want to see make up The Splat! Show. We will then shoot that show for you, as close to your original vision as possible.

We will do our best to match your ideas to create the custom show. You get to keep all of the footage from the shoot, in edited and un edited form.

The Costs - You Back The Shoot

Due to the different nature of the shows produced through Splat! Custom, we will not release Splat! Custom shows here on the website. They will instead be posted on The Splat! Fan Club for members to view after they have been sent to the user who ordered the Splat! Custom Show.

There is just one price for Splat! Custom Shows. Booking is £200.00 and you can feature up to five segments but you don’t need to plan for every segment. Your custom can just include two segments, for example if they some are bigger or more complex.

You will get to talk directly to the team producing your Custom Splat! Show and everything will be done to ensure it matches your plans as close as possible.

This price covers the booking of the Splat! Star, the gunge used and our time shooting and editing the Splat! Custom Show. If your custom includes any props or special clothing, you will need to send them to us if you want them included. We are unable to return props or clothes sent.

How To Book - Get Your Ideas Together And Choose The Star

If you would like to order a Splat! Custom Show, get planning!

Before you contact us about booking a Splat! Custom Show, please get your ideas together and then contact us. We will then take it from there.

While you are thinking about your ideas and the content you would like to feature in your Custom Splat! Show, please note that none of the following content is permitted in a Splat! Custom Show.

Adult Content in the way of full body nudity, self harm or simulated harm, abusive behaviour, racial language and hate speech are not permitted.

Please also let his know which Splat! Star you would like to feature. Both Jon and Kyle are available.

We will talk to you about your ideas and then set a date for the filming.

If you want to book or enquire about booking a Custom Splat! Show, then just contact us here to start the ball rolling.

Please note that full payment must be made once we green light your Custom Splat! Show.

We bring season 16 of The Splat! Show to a close with an epic show featuring partners Angel and Joe. A mix of solo and head to head games feature in our epic season 16 finale!

Jon makes a special visit to Splat! HQ after his “break” to celebrate our 15th anniversary. Cold Gunge and a MEGA Gunging? Oh Jon!

Ivan stars in his fantastic feature show. Ivan is a real charmer and a brand new Splat! legend!

Fashion model Ben takes on our Gunge Tank in his fantastic Splat! Show. How will this intelligent model cope with our Gunge Tank?

Model and sportsman Jamie used his Splat! Show appearance to tell the world he is fit and healthy after suffering a serious injury. They do say Gunge can be used as therapy…

After missing out on a full length solo show last season Splat’s very own Kyle takes on old and new games in his first solo show for nearly two years. Anyone want gravy!?

P.T Steve: Worth The Wait

Personal trainer Steve finally makes it to The Gunge Tank and The Splat! Show after a long delay. He was certainly worth the lengthy wait!

Our resident football fantastic Ash gets tanked 14 times in one show after his beloved Arsenal let him down in Football Splat! Match

Newbie Roan bravely takes on The Splat! Show Gunge Tank in his debut show. How will fun loving new model and boxer Roan take to the messy Splat! Show?

Malcolm makes his third and final (for now) appearance on The Splat! Show in this Splat! Show. While this is Malcolm’s third appearance on the show this marks his first time in The Gunge Tank.

The two titans on The Splat! Show again go head to head for a second time to settle the score. Who will become the victor and who will fail in The Gunge Tank?

Beau is a self styled Victorian Gentlemen. How will he find sitting in The Splat! Show Gunge Tank? Will he say goodbye to his fancy hair!?

Sorry, not available. Season Release Only.

Not So Horrid Henry

Henry relished every moment on the show. Henry is a fun loving actor who gave the Splat! Show a good stab but sadly the Gunge Tank didn’t agree and gave this actor some lessons he won’t forget soon!

Connor Hunter: Gunge On The Beach

Many Splat! Show fans had been waiting a long time for reality TV star Connor Hunter to face Justice in our Gunge Tank. His crimes? He awful behaviour on Ex-On The Beach!

PBK (Pretty Boy Karma) swap the x-factor for the Gunge Tank as they star in our season opener spectacular! 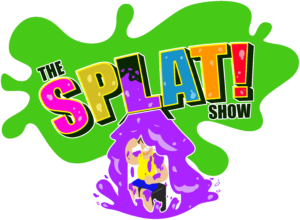 For nearly a year now we have been preparing and planning our new site. Our old site was built on out of date software and is no longer being supported by the developers, everything was secure for our customers but it was hard for us to maintain the website.

We have now moved here to our brand new website. We have built it from from the ground up. and given everything a shiny new look.

We will be adding all past shows back to the site that were not part of our recent moving home sale.

We hope you enjoy the new site and look forward to us resuming show production again VERY soon.

Please bear with us over the next few weeks as we get the site fully operational. All shows on the site should be available to purchase, but if you do run into any trouble, please let us know by using the contact us button in the menu bar at the top of the page.