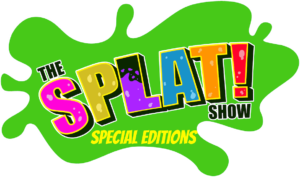 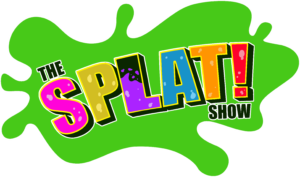 Sadly we were unable to shoot a brand new feature Splat! Show this season due to time constraints, but we still have some great Christmas themed Splat! content for you all.

Ivan’s Christmas Splat! Show from a few years ago is our favourite Christmas show so far at The Splat! Show. Ivan was great to work with and we feel his Christmas show is sorely underrated. With that in mind we decided to revisit this show and update it for 2021 and also offer a jam packed special edition!

We have gone back to the source material and completely re-edited show for this year and created a special edition of this show too which is packed with extras. The Special edition features the show encoded in our highest 4K quality, the HD version and also comes bundled with extensive cut footage of Ivan pre and post Gungings (plus the moment Ivan nearly Gunged himself by accident before a game) and also comes with Ivan’s 12 Christmas Buckets special in 4k, Ivan’s Christmas Gunge Tank Karaoke, The Christmas Porridge Vs Beans Gunge Tank Vote, cut footage and a never released picture pack!

If you haven’t downloaded Ivan’s Gunge Tank Wonderland before then now is the time to download. It’s never looked better.

Ivan’s Naughty Or Nice Choice: It’s to catch up with Ivan has he sits on our very festive Gunge Tank. After a interview it’s time for Ivan to make a very important decision. Has Ivan been naughty or nice? Ivan has to pull one of two cords. One marked Naughty or Nice. If the Gunge Tank agrees with Ivan’s choice then he can leave the Gunge Tank dry. If not…well, you know…

The Big FAT Christmas Quiz: Just how much does our Christmas star know about Christmas? We hope for Ivan’s sake that he knows at least a little, otherwise he is about to get very messy! Ivan is splatted for each incorrect answer and is gunged at the end if he gets more questions wrong than right.

Do YOU Wanna Build An Ivan Snowman?: Just like the previous round Ivan has to get some questions right to avoid being turned into a Splat! Snowman. Yeah, a Splat! Christmas show would not be complete without a ton of foam! We cannot lie, we did shed a tear when we had to melt our Ivan Snowman with a ton load of Gunge from the Gunge Tank at the end of this round.

Squash The Splat! Snowballs!:- The Splat! Balloon challenge has been slightly reimagined for Ivan’s Gunge Tank Wonderland Splat! Show. Ivan has a set amount of time to pop our white balloons (snowballs, get it!?) while being splatted with gunge and foam from the sidelines. Can Ivan pop all the Snowballs in time to avoid The Gunge Tank dumping?

Fill My Hat With Christmas Splat! Finale: It’s time to bring Ivan’s Gunge Tank Wonderland Christmas Splat! Show to an end with a little interview before we give Ivan his final Christmas present of the day. A Christmas hat filled with a ton of Splat! Slop Gunge!

Cut Footage- Your one and only chance to download the cut footage from Ivan’s Gunge Tank Wonderland Splat! Show. Cut footage won’t be offered again in the future and will not be posted to the Fan Club. The cut footage features substantial footage of Ivan pre and post Gunging plus clean downs. This cut footage also features the moment that Ivan nearly got Gunged by accident when he accidentally triggered the Gunge Tank before the Christmas Quiz. We had the camera’s rolling and you can see this funny moment for the first time. Running time: 16 mins, 24 secs.

Ivan’s Disgusting Christmas Vote Mess 4K – It’s not all nice festive fun. We asked our viewers to vote for which food stuff should be filled in the Tank for Ivan to face, Porridge or Beans? The porridge won out but we also threw some beans in there too. It is Christmas after all. Included with every Special Edition download and presented in 4K. Running time: 6 mins, 31 secs.

This is the standard edition of Ivan’s Gunge Tank Wonderland without the extras included in the special edition version.

This show is only available until January 5th 2022 in this current form.

Splat! Split & Switch Status: This show will not feature in Split! and Switch.

Aspect ratio of images has been altered and cropped from the video download. Video download plays full screen in 16:9 ratio. Logo is not in the video. Screenshots are limited to 30 images for each release.