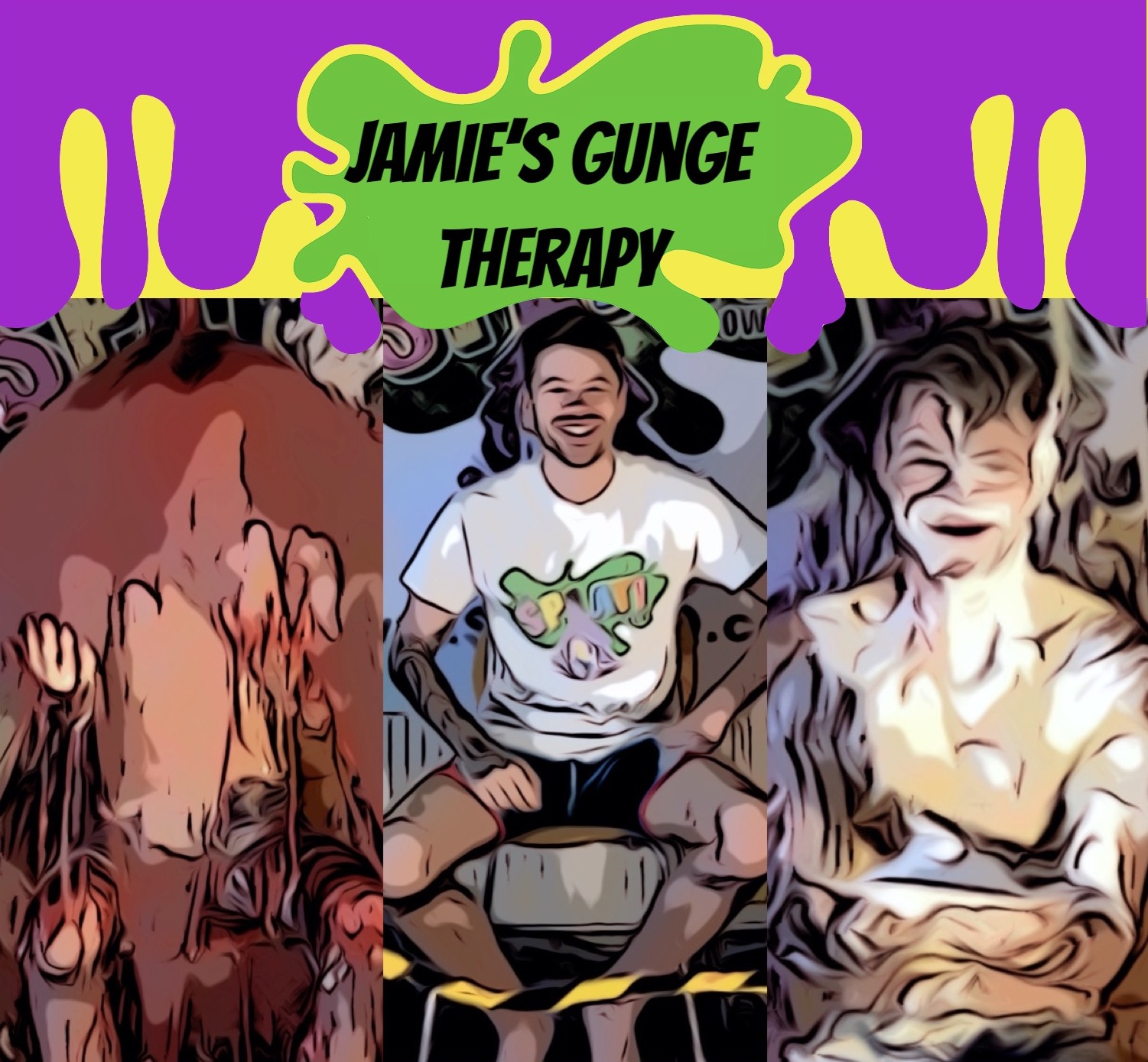 We are always on the look out for contestants who have an interesting story. Our latest contestant Jamie has an amazing and inspirational story and really got into the Splat! Show spirit.

Jamie is a semi-professional footballer who was on the edge of football greatness before he suffered a life changing injury towards the end of 2017. The injury put an end to his dreams and Jamie went into a deep depression as he started his recovery. Being told your dream is over is never easy to take and it hit Jamie hard. Jamie was told by his Doctors that he might never walk again but to the surprise of his medical team he started to respond very well to treatment. He made a miracle recovery and was able to walk again but Jamie was still very depressed and down. Thankfully Jamie pulled himself together and started to look the future and decided to give modeling a go. We approached Jamie to see if he would be interested in coming on the show and he said yes and we are so happy he did.

This is a fantastic show that not only features our world famous Gunge Tank and Gungings but is also a show that showcases Jamie, a guy who did not give up. Jamie came for some Gunge Therapy and we couldn’t be happier to feature him. Enjoy the show!

In the Splat! interview we dig deep into Jamie’s story and why  he decided to come on the show. We always make a point of getting to know our guests and more than most, this interview shows that no matter what happens in life, you have to keep going. Jamie could of just given up but he wouldn’t be on the show if he did and we are glad he didn’t give up because he is one of the strongest new guests this season. Of course the interview ends with Jamie’s first tanking! Splat! Fan Club members can watch this interview as part of their monthly subscription on the Splat! Fan club and also get a discount on this show.

DIY Foam Me Up

Jamie, fresh from his first shower takes on his first game. Foam me up with a DIY twist. For each incorrect answer that Jamie gives us, he will be handed a plate of foam which he has to cover his body with. The same Foam Me Up rules apply, once his is “Foamed Up” it’s game over and his second taking awaits.

Be Wetter The Better Or Slimed and Stupid

Jamie joined us on a day where we had a brand new game to play and we think it’s a new classic. In Wetter The Better Or Slime and Stupid, Jamie has to try and avoid the slime and instead get wet. Three massive water balloons hang above Jamie’s head and these are his targets. For each correct answer one of the balloons is popped over Jamie’s head. Jamie has to get through the maths based quiz and pop all three of his water balloons before the quiz ends. If any of the Balloons remain then he has failed. Jamie must get three questions right to remain Wetter and Better otherwise he will be branded Slimed and Stupid and a taking awaits. And yes, Jamie did bring a set of his own clothes to play in for this round.

It’s time for our round of Physical Games as Jamie plays Balls To That and Splat! Ring Toss. Jamie has to get 50 balls into his singlet within 60 seconds to avoid getting pied ten times and has to complete the ring toss to avoid a tanking. Will this athlete rise to the challenge or will he fail?

Custard has been in short supply this season. We correct that with Jamie’s Custard Caper. A crazy pie throwing game that sees Jamie absolutely covered in custard and cream. After Jamie’s success in the last round it’s back to reality for Jamie has he fails to stop the pies coming his way and fails stops the tank from adding to his messy torment.

After a longer than usual Splat! Show (we had to re-shoot one game after it didn’t record) Jamie is ready for his Splat! Debrief interview and his final Gunging of the Show. It was a great pleasure to work with Jamie and see this young man overcome his recent troubles. We hope to see him back on the show very soon!

Content Guidelines: Shirtless in some scenes and some minor swear word usage. If we had to give it an age rating it would be PG. Learn more. 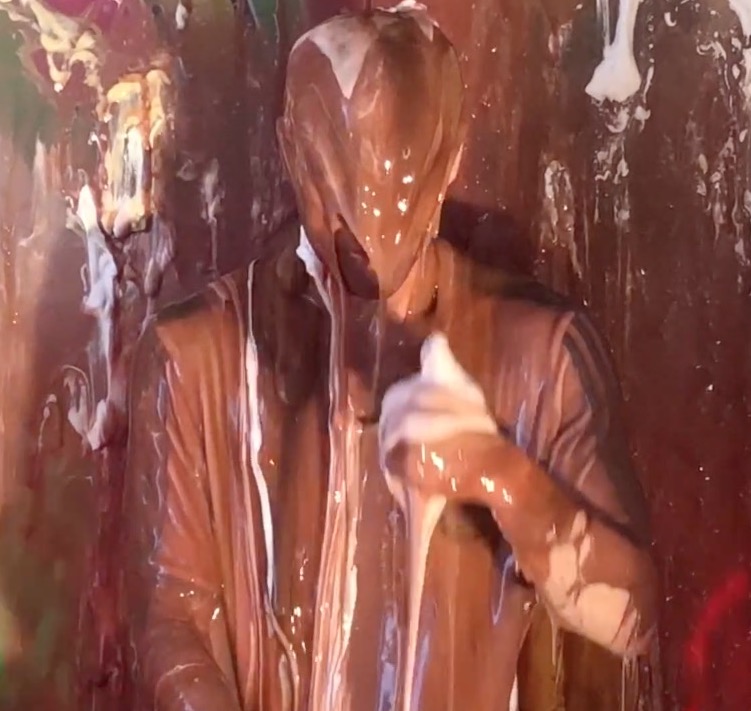 You might have noticed that I haven’t done a blog for a while.  Cards on the table, my health hasn’t been good and I really wasn’t in a fit state to help with Roan’s show (apparently you all really REALLY like Roan) and personal issues kept me away from the Kyle shoot as well (I was absolutely gutted to miss that one because Kyle was damn good fun to work with at Easter… though given that HQ STILL has the whiff of gravy maybe I got away lightly).  Last week we took the decision to postpone a shoot due to the heatwave so today was the first opportunity to make a much needed trip back to HQ.

New model.
New games.
And a message from Pete saying he wasn’t feeling well. (Yes James, it’s the stress from running this website, but I love it! mostly!)
Before I’ve really realised what my fingers are doing I tell him not to worry, I’ll do whatever bits he needs to get it in the can.
Skipping ahead, Pete and I provisionally call the show Jamie’s Gunge Therapy but strictly between you, me and the blog…. today turned into major therapy for me as well.  Just don’t call me Jamie to my face 😉
Jamie really makes a good first impression as he arrives.  Big plus in my books… he looks like his modelling photos.  To me that’s always a sign of someone who’s going to be honest on camera, easy going and lacking pretention. He doesn’t disappoint.  Right through the shoot he’s laughing, smiling, joking around and when it comes to discussing his personal life…. seriously, I think I have a new hero.  By the end of the interview section I already know that I want him back at Splat next year just because I want to know how things turn out for him.  Well that and he takes the gunge really well of course.
As we are looking to change things slightly, even once the official interview segment is done I still get to do a mini interview at the start of each segment.  Jamie is very easy to talk to and with his story as it is I decided that I wanted to really let him tell it.  I know there are those of you out there who skip to the mess but more than in any other show, today the interviews are important.  Jamie isnt just any old model, he is truly inspirational but you have to let him tell the story to find out why.  You also have to watch the quizzes because they are a scream! I’m off camera trying to hold it together, keep the show moving when all i want to do is laugh.
Jamie, if you ever read this, I haven’t laughed that much at a shoot in a long time.  Thank you for getting the spirit of Splat from the word go and being the biggest sport possible.  With no live feed, only the truly observant viewers will know the sacrifice you made for us today and I applaud you for it.
Games get done, the debrief interview flies by and it’s time for the splat storm.  Yeah… Jamie gets a STORM! I think in that one segment he gets something like eight full buckets from all angles.  When he stands up at the end to start the clean down, you cannot see his feet at all. And yes, those 70 or so litres have to be emptied out by hand…. And when we see the gunge leaking out of the back of the tank they have to be cleaned out almost as quick as they went in so whilst Jamie takes his last shower of the day (after he gets the traditional briefing about places he will need to wash carefully such as behind the ears) I get the first 50 or so litres out as quickly as I can.
Know what though? Even though the clean up is a real intense outlay of energy and even though I’m absolutely drained… I don’t mind it one bit.  Cleaning the tank down is my guide as to how the show went on the mess front.  The more there is to clean out, the more soggy remnants of paper plates, the more swirls of colour there are, the happier I am that I’ve done my side of the job well.  And today, by the time the tank is finally clean I’m utterly wiped out of all energy.  I reckon it’s about 90 minutes at least to really get it done and finished properly.
I feel honoured to have worked with Jamie today.  He’s reminded me that it’s always worth fighting for what you want.  I’m writing this on the train home.  I’m simultaneously completely and utterly drained AND thoroughly refreshed.  Plus I’ve worked with Jamie.  Remember his face.  I think people will be seeing a lot more of him over the years.
Translate »