Go Back To Splatette! Show Home 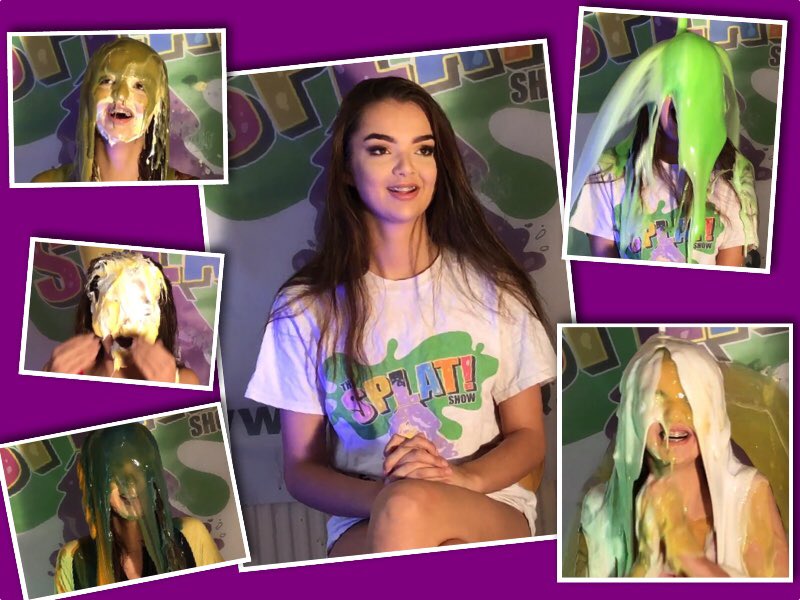 Thank you for being patient while we transformed into the Splatette! Show. Over the past year we have been building up to relaunching our female contestant focused Splat! Show and we are pleased to present our first new show under our new name. And do we have a show for you!

Melissa is the star of our first Splatette! Show and we couldn’t of asked anymore of her during her shoot. She took instruction well and seemed to really enjoy the whole Splatette! Show experience and did not doge any of the Gunge coming from the tank and the pies being thrown her way. The whole show was a complete joy and we hope that comes across when you download and watch the show.

Melissa arrives at Splat! HQ for her first Gunge experience and our first Splatette! Show. As is custom with all new contestants that appear on Splat!, we interview Melissa and take time to get to know her. Everything is covered including what she is expecting from today’s shoot while she sits in the Gunge Tank with over 50 litres VERY THICK gunge above her head. Then the times comes for that gunge to drop into the tank where Melissa is sitting. Reaction? It might surprise you!

Lucky or Mucky is a fun game where the contestant has to try and get through a quiz without triggering the gunge tank. As it happens Melissa triggered the tank on the first incorrect answer she gave us but we did carry on. It then happened again! So we gave her another life and she nearly escaped the Gunge. We say nearly because Melissa got another VERY THICK gunging from the Gunge Tank. Sorry Melissa, this time you are mucky!

With Melissa getting gunged twice already we mix things up with the introduction of some custard pies. We love pies, you love pies and it seems that now Melissa loves pies! Just how many pies will Melissa take. The Gunge Tank is always a threat on the Splat! Show and it’s no different here in the custard Pie game. Melissa gets tanked if she gets more questions wrong than right!

The Splat! Debrief AND The Wheel Of Messy Fates AND A Tank Surprise!

In the final segment of Melissa’s Splat! Show we interview her to find what she has thought of her time on the Splatette! Show. After the Debrief interview Melissa has to spin the Wheel Of Messy Fates. Melissa gets three spins. The first spin is purely used to get a feel for spinning the wheel. The second spin Melissa can take the fate or pass in the hopes that the third and final spin is not as messy. But whatever Melissa does she has to take what the third spin lands on if she goes for the final spin. Will The Wheel Of Messy Fates be kind or cruel to Melissa. Oh, and watch out for the surprise gunging from the tank at the end, Melissa certainly wasn’t expecting it!

Melissa took on the Splat! Storm at her Splat! Show shoot. The Splat! Storm is a relentless deluge of gunge from all directions. Gunge blasters, foam cannons, bucket throws and tank drops. There is nothing quite like the Splat! Storm. Presented in HD & 4K.

The Gunge Tank votes are completely controlled by the Splat! Viewers via pay per vote. The participant with with the highest number of votes gets an instant Gunging while the runner up has to play The Great Gunge Tank Escape which enables the runner up to avoid the gunge tank if they beat the game.

In the first ever Splatette! Gunge Tank vote it is Beth Vs Melissa. Here our viewers voted for Beth to get the instant Gunging while runner up Melissa took on The Great Gunge Tank Escape.

More On The Splatette! Fan Club