The season 14 finale is here! We started our 14th season with Simon so it’s only right that we finish with Simon. We love working with Simon and we have a great show with him to finish off this fantastic season of Splat! Shows. Season 14 has been a real pleasure for us to produce and we hope you enjoyed this season as much as we have. Read on to find out what is in store for Simon in our season 14 finale, Simon’s SLIME!

Gunge Tank Interview: We welcome Simon back into the Gunge Tank for a catch up interview. What has he been up to since his last shoot? How does he feel about starring in our season 14 finale? In this interview we find out. The interview finishes the way every Splat! show starts, with a lovely gunging from the Gunge Tank!

Top of the Slops: We countdown the top five gungings from season 14. In this part we countdown 5 to 4!

Gungy Pants / Slime Speedos: Getting Simon to agree to take part in Slime Speedos is a big deal. While Simon is great to work with, he knows that he can’t do anything that is a little risky due to his day Job. Slime Speedos / Gungy pants is about as far as we can go with Simon. It was a great pleasure to see Simon pushed to his limits. As played previously in the season by Ash and Anthony Simon has to fill his Speedos with Slime with each wrong question. He has to try and make it to the end of the quiz without the Gunge overflowing out of his Speedos. If the gunge escapes from the Speedos it’s game over and a Gunging awaits!

Top of the Slops: The countdown of the best Season 14 Gungings continue with numbers 3 to 2!

Splat! Distraction: A game that will feature in season 15. The rules? Simple. Simon is set the task of reading off a sheet of paper while enduring a Slime storm. Gunge is thrown over Simon to try and distract him while he tries to complete his task. The result? Simon gets mucky!

Top of the Slops: Which Season 14 Gunging will take the number one spot? We reveal our favorite gunging from season 14.

Simon’s Custard and Slime: Simon loves custard. No, he really loves custard so we could not do a show without throwing a few custard pies in Simon’s face. Simon tries to get through the Quiz by getting as much custard as he can! He then takes a trip to the Gunge Tank after he has basically used all our custard supplies for some Simon Slime!

BONUS GAME: Simon took part in a Gunge Tank vote in season 14 and he was voted into the Gunge Tank for the gross Gunging. When we told him about the Gunge Tank escape game he would of played if he escaped the vote he wanted to give it ago. So in this bonus game we give Simon the chance to try and crack a secret code before the time runs out. If he fails, yup, he gets it!

Simon’s Slime FINALE: It was a real pleasure to shoot with Simon again. This was supposed to be Simon’s finale shoot with us but he told us he had such a good time he would be up for a return! We finish off the final season 14 show with the only way we know how, a REALLY thick Gunging in our famous Yellow and Black colors!

Simon’s Custard Dream Splat! Special!: Bit of a weird one this, even by our standards. It’s not a secret that Simon loves custard. So we gave him a few cartons to do what he liked, even though he threatened to throw them at the producer thankfully Simon just had fun with custard…and some cream…oh and some beans! Yep, we did say it was a little strange this one! Video details: 10 mins 0 seconds. HD. 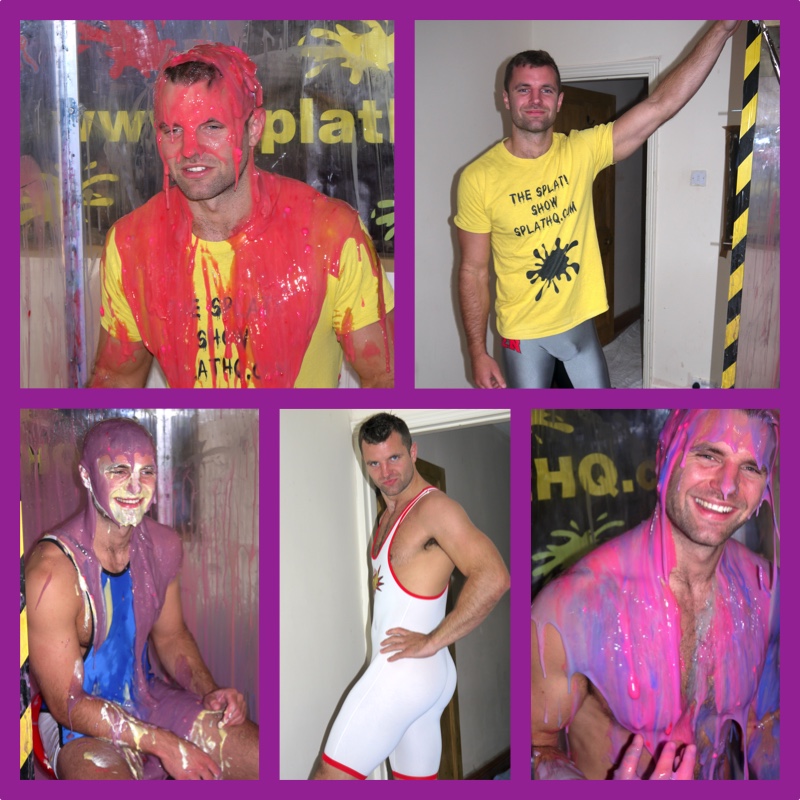 Download Simon’s Slime Picture Pack from his Simon’s Slime Splat! Show shoot that includes 40 high res pictures. These pictures were shot especially for this picture pack and are not screen shots from the video.

Download Simon’s Picture Pack 1 that includes 50 high res pictures. Taken at his first Splat! Show shoot. These pictures were shot especially for this picture pack and are not screen shots from the show.

Download Simon’s Picture Pack 2 that includes 38 high res pictures. Taken at his first Splat! Show shoot. These pictures were shot especially for this picture pack and are not screen shots from the show.

It’s Anthony VS Simon in the Gunge Tank Vote! The results are in and Simon received the most votes and was instantly Gunged in the Gunge Tank. Anthony had to try and avoid the Gunge in The Great Gunge Tank Escape…and did it…but wanted to get gunged anyway…