Halloween: Dress Up Mess Up 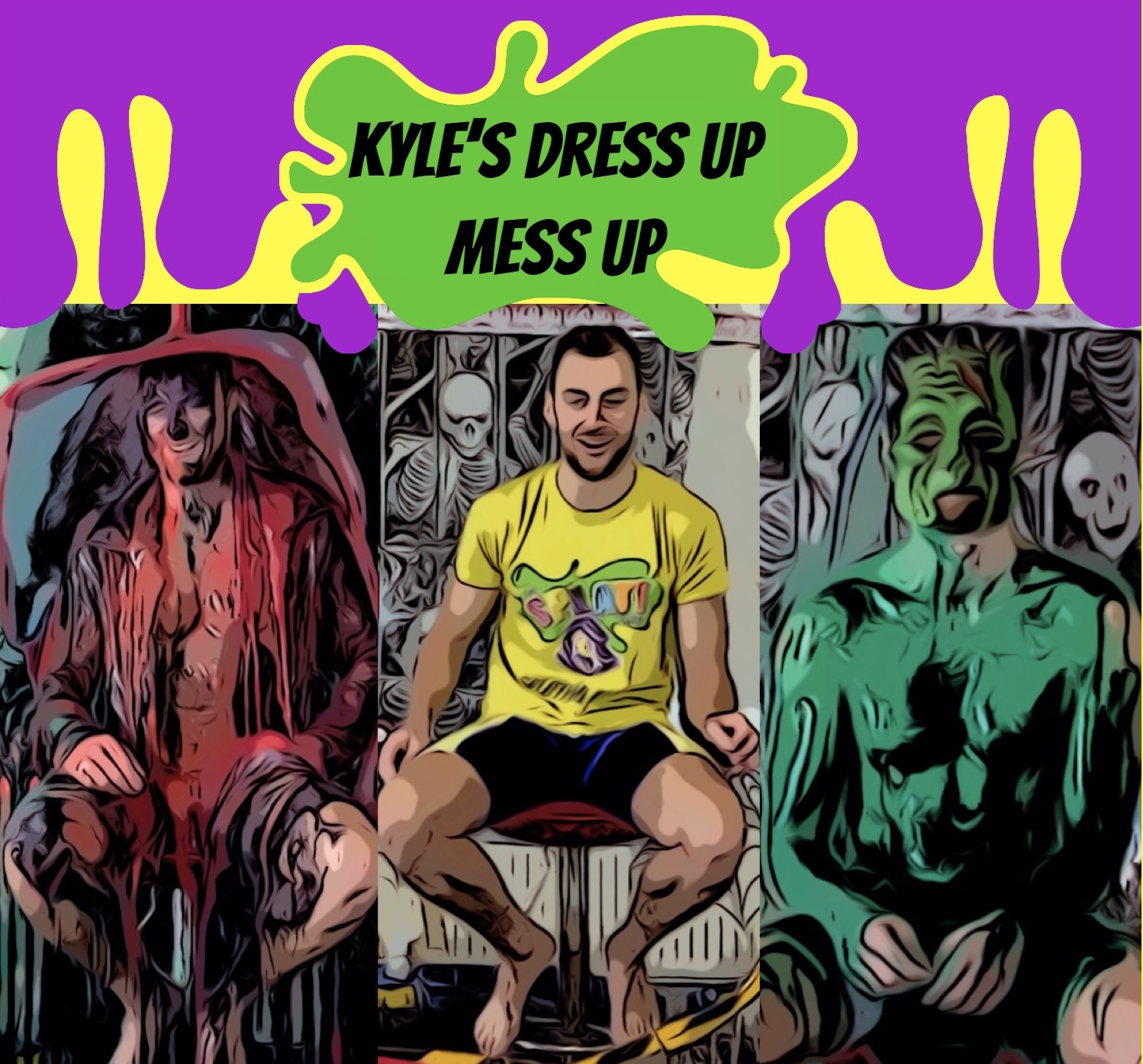 It’s the Halloween special we know that many of you have been waiting for. Kyle, who has already starred in Easter and Christmas Splat! Shows over the years has now shot his final Splat! Show holiday special and thus completed his Splat! Show holiday trilogy. Halloween has always been one of our favourites to film and for a moment we thought this years special wasn’t going to be able to go ahead. We don’t need to tell you that COVID-19 has seriously effected our commercial output this year and that is why we didn’t announce the shoot until the day before, and even that was a small scale announcement to the fan club. But you are reading this which means we do have a Halloween show for you this year and it’s a dress up special too!

So Kyle, last seen on the show nearly a year ago (again, thanks COVID), finally takes on the Splat! Show Halloween special for our annual Halloween celebrations. Instead of going for an “evil” show like we did with Benji last year (sorry Benji!), we went for a more fun and silly Halloween special with Kyle this year because let’s face it, we need some silly fun this year. Halloween is more of an American holiday and take the dressing up part really seriously. So we decided to base our Halloween special with Kyle around dressing up. Good fit don’t you think? We mean, he did that Cosplay special last year too so this should be right up Kyles street.

We hope you enjoy Kyle’s Halloween Special: Dress Up MESS Up.

The Gunge Tank Interview + True Or False Halloween Quiz: It’s been nearly a year since Kyle was on the Splat! Show so before we get into the show we catch up with Kyle with a little interview. It’s then straight into the first Halloween themed game of the show. The costume for this round? The Splat! Show outfit or course! It’s Kyle’s first time in the new outfit too. To beat the Gunge Tank in this round Kyle has to get more true or false questions right, failure to do so means the first tanking of the show.

Let’s Make A Monster with Kyle!: It’s time for the first spooky costume and this time we are also going to make a monster! We thought long and hard about the Monster that Kyle should turn into and we settled on Frankenstein. Kyle puts on the mask, but something doesn’t look right. His body is not green! We soon fix that as Kyle takes on a quiz all about famous monsters. For each incorrect answer some green gunge is blasted. Once Kyle has been completely turned into our monster it’s game over and the gunge is released to kill our monster. It turns out that the Gunging actually made our monster more terrifying than we could imagine. Watch and find out why!

Death Quiz with Gladiator Kyle : Things turn a bit morbid for this Quiz but its actually a good fit for the costume that Kyle is wearing for this round. A Gladiator. No, not the Lycra clad Gladiators from 1990’s British Television, but the ones from Rome. Gladiator Kyle his quizzed on famous deaths that have occurred over the last 100 years. For each incorrect answer, Gladiator Kyle has to spin the Splat! wheel. Land on a Thumbs up and it’s all safe, but land on a thumbs down and it’s a life lost. Land on the thumbs down three times and it’s game over for Gladiator Kyle and it’s Gunge Time!

Baywatch Lifeguard Kyle’s Splat! Storm: What’s this, a Splat! Storm included with the actual show? Yeah, like last year The Splat! Storm is included in our Halloween special. We thought it would be fun to have Kyle dressed as a Life Guard (from Baywatch no less) for the Splat! Storm. In what is possibly the most brutal Splat! Storm that Kyle has faced to date, he does his best to make it through the torrent of Gunge. No one said being a Life Guard would be easy, especially when you are dealing with gallons and gallons of Gunge.

Caveman Kyle Plays Feet Slop Bobbing: We’ve already done Slop bobbing with Lucas and his head (see it here) but now we are doing some slop bobbing with feet. Kyle, dressed as a Caveman has three minutes to get all the balls out of the buckets of Halloween slop. Failure means Caveman Kyle gets a tanking. Does Kyle have the feet skills to complete the final challenge for his Halloween special and avoid the Gunge Tank? 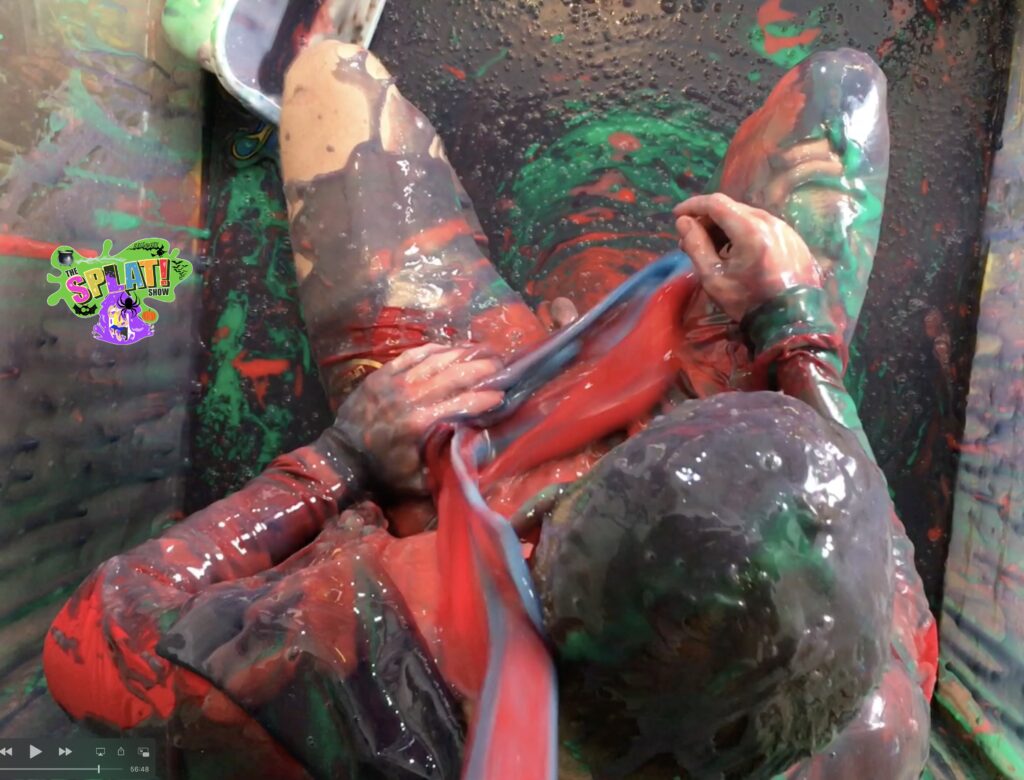 T W From London: “I’m really impressed with the Halloween special. I particularly enjoyed the bobbing in the gunge game. Such a fun looking game. Thanks for a fun and fantastic special Splat Show” 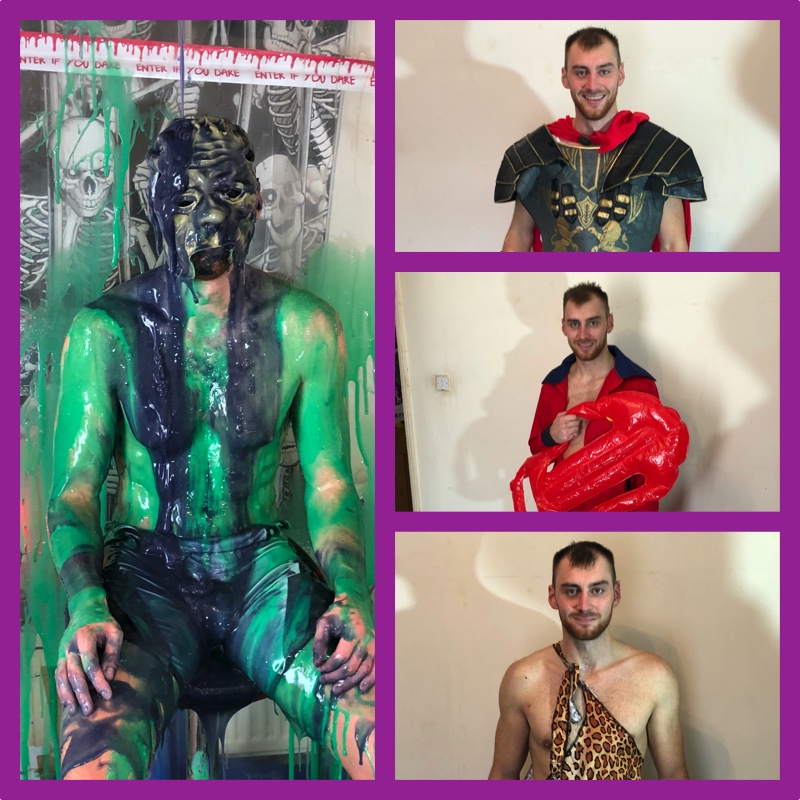 Halloween 2020 Splat! Shoot Picture pack featuring 53 high resolution pictures taken at Kyle’s Mess Up Dress Up Shoot. These pictures were shot especially for this picture pack and are not screen shots from the show.

Dress Up Mess Up - Cut Footage 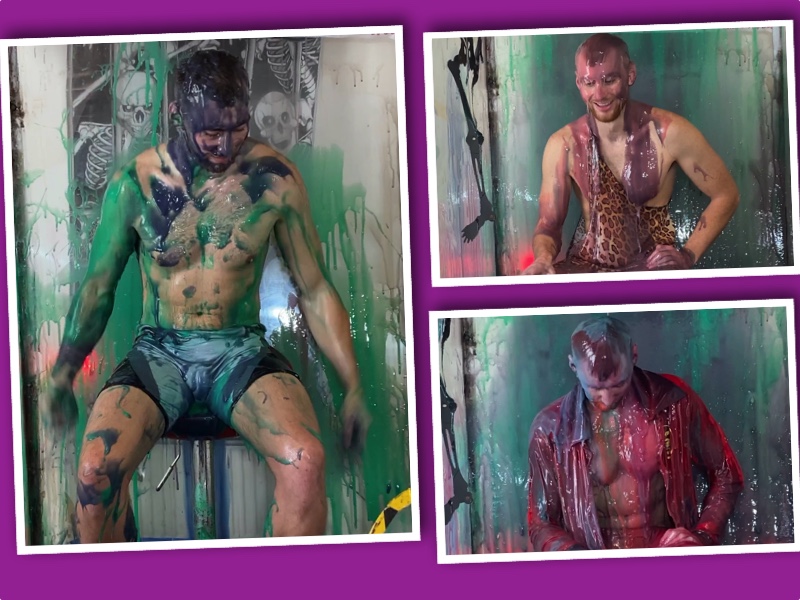 Check out the cut footage from Kyle’s Dress Up Mess Up Splat! Show shoot. Featuring pre and post Gungings including clean downs and more!

Been a while, hasn’t it…. not through our choice though.  A few small world events basically put Splat on hold for a while – along with quite a few other things admittedly – but Splat doesn’t give in.  Pete has been working away in the background on a LOT of ways to keep things going and you’ll have seen the results slowly coming out.  Like everyone else on this planet, I’ve also had a few things going on in the background but there was no way I was going to miss today’s shoot.  Especially as I’ve been booked to help out on it for at least a year now 😀