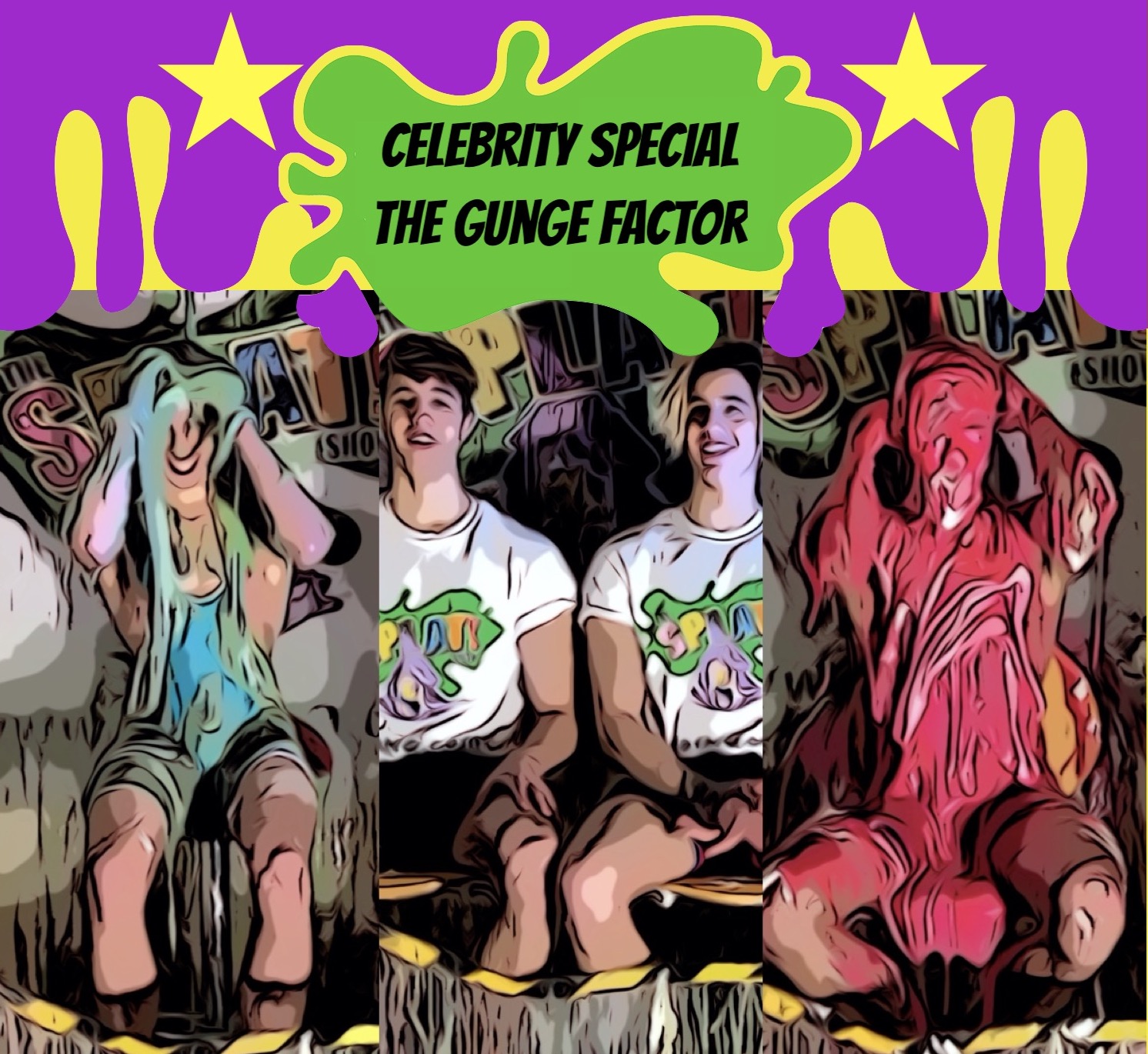 Towards the back end of season 15 production, season two producer Tim contacted us with some great news. Tim had secured booking with a guest he thought would be a great fit for us. We have been after a number of celebrities for years and we finally have one, actually two ready for a Splat! Shoot. Now depending on your definition of celebrity, Pretty Boy Karma might not exactly be celebrities to you BUT they did appear on the last season of the X-Factor and have done some press recently.

So fresh from their X-factor fame, Boyband Pretty Boy Karma now face the season 16 opener with none other than season two’s Tim producing, so you can expect Pretty Boy Karma to get some serious Splat! Show mess!

With PBK being the first celebrities to appear on the Splat! Show we have to interview them. Tim gets to know the lads known as Pretty Boy Karma with the interview ending on a fateful note. Which member of PBK will be the first in the Gunge Tank? Tim has the tool and ways to decide the outcome!

This might as well be called Brother and Brother but that doesn’t sound right. Brothers PBK play the famous MR and Mrs. Before the shoot each member filled in a questionnaire about themselves. The brothers were then asked questions about each other and had to correctly guess their answers. IF they didn’t they get messy and have to loose an item of clothing. The person down to their boxers gets the gunge!

A brand new game from TIm. The rules are simple. The contestant with the most plastic balls in their singlet avoids the Gunge. So which member of PBK is best and who will end up getting slimed!?

PBK’s claim to fame is due to their appearance on the X-Factor. So in this custard Pie quiz we test PBK’s knowledge of the X-factor with pies a plenty for wrong answers! Will it be mess all round or will one member get more than their fair share?

We put PBK’s singing to the test in Gunge Tank Karaoke. They have sung live on TV before but how will they manage trying to do the same while getting trashed in the Gunge Tank live on the net. We wonder which they prefer? Singing for Simon Cowell of taking part in Gunge Tank Karaoke? A Fitting end to our fantastic season 16 launch show!

Huge thanks to Tim for helping get this show on air.

Content Guidelines: No swear word usage and some shirtless scenes. If we had to give it an age rating it would be PG. Learn more.

Which P.B.K brother did the viewers want to see get the instant Gunging? We find out. It’s probably the only one game they both wanted to win. It’s a popularity contest after all right?​ 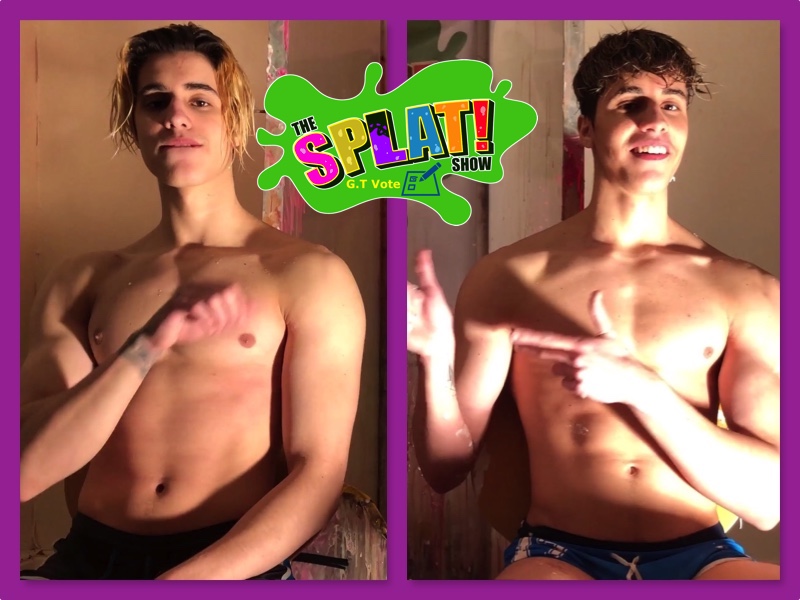 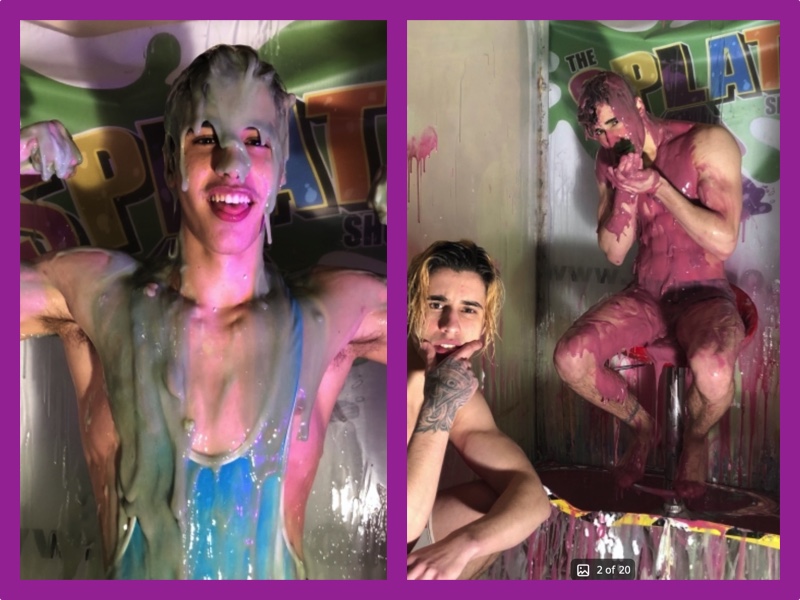 New season and new faces.  Not just a couple of new faces either but FIVE guys who’ve never been gunged before. Season 16 just hit new heights of mess and mayhem…

Roll back a few days. Even though the shoot was on a Monday, the planning and contracts have been in place for a while but supplies need to be purchased.  I’m lucky, I’ve got a cluster of pound type shops all around me so I start on what I now think of a The Pie Run, a few cans of foam and a few cartons of custard per shop and each shop done a few times… that’s just about enough to get us through a five man shoot I hope. Snacks (well, mostly protein bars because I’m still having body issues and I’ve seen the promo shots of Pretty Boy Karma) and various changes of clothes also packed in the backpacks.

Sunday night… final arrangements for travel etc agreed (unusually for me I’ve pre booked tickets) and bleugh… my alarm set for an hour I wish didn’t exist on my day off.  But it’s Splat and I know it’ll be worth it once I’m there.

Monday morning.  Pets given food for the day, I make myself popular on the tube with two backpacks (please no one ask me what’s in them or try and move them out the way with their feet…. my brain doesn’t want to contemplate what would happen if the custard or the foam split open)  and then national rail to Splat.  Right through this I remind myself it’s someone else’s shoot and I’m there as crowd control and “muscle” and I don’t have to do any actual thinking. I get to SplatHQ and we wait for the arrivals.

I’m not saying they were late BUT there’s a shared knowledge between Pete, Tim and myself that shoots take time and the gunge is getting cold…. actually, that second point is cause for much delight and several texts are exchanged saying they’ve brought it on themselves.  The good thing though is they seem to have a sense of humour about it.  This gives the three of us hope.  When they do arrive there’s that sudden moment of realisation with pretty much every shoot with newbies.  We have five boyband members at HQ.  We have to film two shows, keep things moving AND keep things safe.  However they all seem really attentive when we run through things with them.  I’m actually pretty damn impressed.  Guys, if you’re reading this….  yeah, you were great from the moment you entered to the moment you left.  Keep that attitude up and people will love working with you.  First impressions are everything and you made a real good one.

So the shoot.  We are usually pretty flexible with the shoots but today’s was the Splat equivalent of a military operation.  I’ll let you into a secret.  We only have one shower.  We normally only film with one guy, maybe two.  One shower is enough.  But five guys…? The guys are great though.  They’re a bit bemused at first but once we describe it as the atmosphere of I’m a Celebrity (i.e. challenges with forefeits) they seem to grasp it. Offshore kick things off upstairs and I do the prep for one of Pretty Boy Karma’s segments downstairs with them.  Pete’s dealing with the technical side (twitter etc) and things actually run, shock horror, pretty damn smoothly.  I’m on tank duty as well (one day, on one of these big shoots, I’ll remember not to do the gym the day before because those buckets are heavy and regular) and through the course of the shoot I only spill a bit once.  Okay the tank was its usual leaky self but know what, I’m really fond of that thing and though I secretly hope I’ll end up back in it one day, yes I do actually enjoy the behind the scenes cleaning etc.  If you’ve ever watched the live feed you’ll know how many times I have to scoop the gunge out! What you possibly don’t realise though is how much gunge leaves the tank  during the shoot.  The matting in front of the tank turned into something akin to an ice rink today and yes, for the gunge tank karaoke I get carried away again and miss the tank a few times spreading the mess further.  Well.  I say I “miss” but where’s the fun if the guys know where it’s going each time?  Plus we have THREE guys in the tank at once at one stage, there’s hardly any room left for gunge as it bounces off them!

The shoot lasts something like five hours in total. We finish as we started with Offshore in the tank.  How did they cope with gunge tank karaoke?  That would be telling.  Same as it would be telling which body parts Pretty Boy Karma are happiest with, which boyband member is the smartest and it would DEFINITELY be telling which one of the five tried to, ahem, boost his ego when in Lycra.

More happy memories than I can count.  2018 is going to be an awesome year.  Just hope they don’t question why I’m back in Poundland tomorrow stocking up for the next shoot….