What a year 2020 has been, not just for us, but the entire world. Our promise to produce more commercial releases during 2020 could not be met due to a certain virus pandemic. Thats just how things go but if you know anything about us you know that the health and safety of our team and guests is our top priority. When we had to stop, we did just that. So while we could not produce as much content as we hoped during this year, we are incredibly proud of what we did manage to produce. We don’t want to dwell on the negatives too much, but thank you for the support you have shown us during this challenging year. Our fans are why we do what we do, so if you supported us this season. Thank you!

Right, enough of that pandemic stuff. Let’s get on and talk about the amazing season 18 finale feature show we have for you!

When we re-started production in the summer we knew that the probability of future interruptions would be an issue. So we did what we could but we knew that we had to act fast while keeping an eye on the news. Whatever happened, we were certain that we needed to get our season 18 show done and done fast. Daniel was our pick. Why? Well he hasn’t actually featured in a full length Splat! Show on his own yet. So what better show for him to star in than our massive season finale?

Shot just a few days before the second lockdown was announced for England, our season 18 finale is our biggest and messiest show of the season. It is the season finale after all. If there is one show you buy from us this year, this is the one. It’s pure escapism for our collective troubled times.

We really hope you enjoy watching Daniel  enjoy all the gunge coming his way. You know he loves it.

The Gunge Tank Interview + Gunge Tank Roulette: – We’ve done an interview with Daniel before so for his first feature length Splat! Show we turn to Gunge Tank Roulette. There is a set of probing questions for Daniel to answer after he spins the wheel. Questions to really get to know more about our Splat! Star without his older brother hogging the limelight. One of the numbers on the Splat! wheel will trigger the Gunge Tank and get our season 18 finale well and truly underway.

Foam Me Up: – Foam me up is back! We found it really hard to get the foam we use for this game after lockdown and was only able to secure some for this shoot. It’s a game a lot of you love and we love it too. You know the rules now, if Daniel get’s a question wrong he gets foamed. Once Daniel is completely foamed, the Gunge Tank is triggered and it’s game over. If you download this show before December 1st you will also get The Foam Me Up Cam footage. It’s just like the Gunge Tank Cam but viewed from the foam cannon perspective.

Wetter The Better, Slimed Stupid: –This is a game that many of you have told us is one of your favourites. We can only guess why, but maybe it’s the mix of water and gunge or maybe it’s the white singlet we get our guest to wear for it. Whatever it is, it seems that every guest who has taken it on love it too. Yes, we do make sure the water is warm (we make everything warm) and it’s more a pride thing than anything else that they want to get wet. Why? Because that means you are winning. Get some wrong, then it’s slime time and you are officially stupid. For this round Daniel chose food as his specialised subject.

Splat! Upon High!: – Splat! Upon High is a brand new game for us and we think it turned out pretty well. So what is it? Well you can see by the trailer and teaser pictures, that Daniel is raised up high on the Gunge Tank stool closer to the Gunge Tank. In this game Daniel knows that he will get Gunged at the end of the questions, but he can limit the mess before the Gunging if he gets the questions right. Daniel is subjected to Gunge throws, foam and pies (yay!) along the way to the tanking. Just how messy will Daniel get in Splat! Upon High?

Sticky Splat! Slime Wrap Up : – It’s the end of the show and the season. So how about a slight change for the end segment. We got some special alien slime for the tank for the finale of the show. This gunge has a very different consistency compared to our usual gunge and was actually used in the Alien films for the Alien slime. It’s sticky and very stringy. After a short post shoot interview with Daniel the sticky slime is released for Daniel to experience. Will he enjoy this gunge as much as the usual gunge? Find out and see. We also bring the season and show to an end with a few bucket throws too. 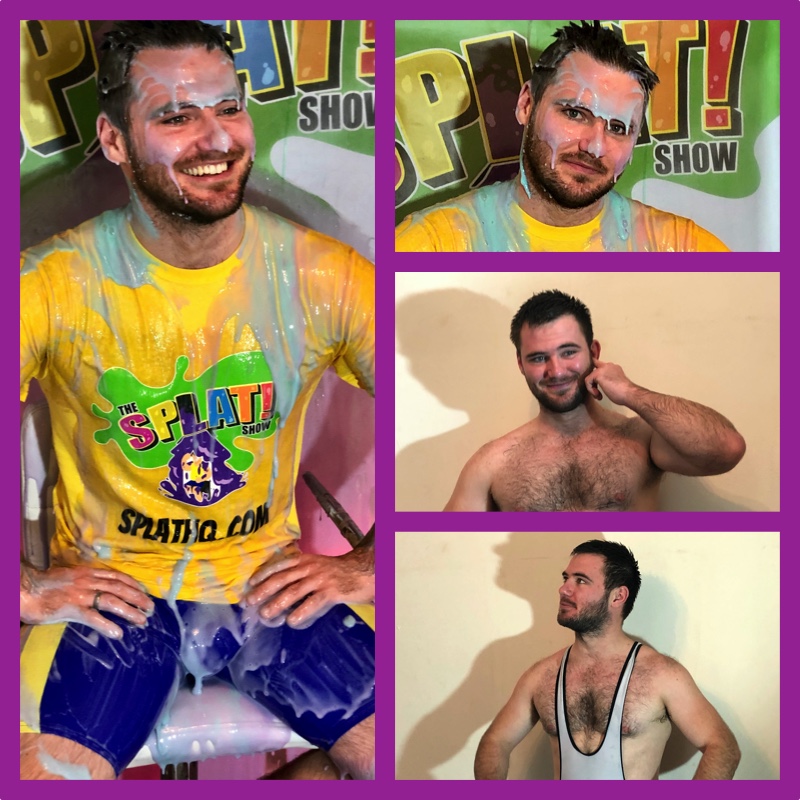 So if you hadn’t noticed, there’s something of a pandemic going on.  It’s a pretty scary situation and I’m going to be honest and say that a while back I was even umming and errrrring about if I should be doing it.  But this is Splat and when the going gets tough….. the tough get messy 😀  And what better date to film the Christmas Special – that isn’t a Christmas Special – than on Halloween…..  Oh come on, this is Splat, when do things EVER make sense?

Check Out Daniel's Other Splat! Shows...