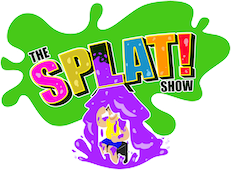 Welcome to The Splat! Show Team production blog. Here you will find important updates from the team that make the Splat! Show a reality.

If you want to contact us, please go here.

The Year Ahead and 20th Anniversary Plans

Pete here. I hope you all had a lovely Christmas and a safe new year. As the new year has now started, I just wanted to give a little update about the year ahead and a little personal update.

Before I jump into our plans for the year ahead, I just wanted to give a small update regarding myself. Last year was the first year that we were able to produce the show without too many distractions. Thankfully, we didn’t have to deal with any COVID restrictions (although the virus itself did still cause some issues for us and our guests) last year and it was very much all hands on deck during the year. We managed to produce our biggest season since season 16 and James was also able to make a few shoots too as he continued to gain strength after his long COVID battle. I was also able to schedule some down time away from the shoots in December for the first time in years which ran into early January. As I started to rest, something odd was happening and I felt very off. Burnout out had been creeping up on me throughout the year without me really noticing. It was only when I stopped to take a break that I felt exhausted and I was feeling the full effect of burnout. If you’ve ever experienced burnout you will know it’s not nice. You have zero energy to do anything, and I mean anything. I managed to continue to process orders as usual, but my plan to make some plans for the new year were not going to happen during this time.

Running this site and all its operations, shoots, business stuff and regulatory stuff takes its toll and sometimes it’s TOO much for me to handle physically and emotionally. I am getting a little better now and I will soon start to get back to running the shoots (the first private of the year is approaching). I will be making sure that during 2023 that I do not over stretch myself. This may mean that this coming season may be smaller in scale, but I won’t know that until the end of the year. My health is important and working the way I did last year will send me to an early grave. I will do my best as always, but I won’t let it affect my health to this degree again.

So what about the year ahead? Season 21 is the season that will lead into our 20th Anniversary season. Yep, September 2023 will be the start of the 20th year of The Splat! Show. I can’t quite believe that it’s been almost 20 years that The Splat! Show idea was born and that we are still here producing new content 20 years later. It’s crazy to me but so incredibly exciting. We are still here because of YOU and the support you’ve shown us over the years so thank you!

We will of course be sharing our plans for our 20th anniversary as we approach September, but we have season 21 to shoot and complete before then. I will share more details about both when I am able to.

Thank you all for the support and I hope you look forward to the coming year!