Two heavyweights of The Splat! Show go head to head. Who will end up in the Gunge Tank the most!?

Ash has been around on Splat! for many a year now but it may surprise you to hear that Ash has never done a joint show with another model. Well after shooting his first double header with Kyle it’s quite clear to us that we should of teamed him up sooner. Ash and Kyle hit it off straight away, both clearly having fun with lots of banter and relishing the thought of the other getting the gunk in their place. This show also features some fantastic gungings that include our new colouring technique to make the gunge really pop!

If you are fan of Ash or Kyle you should not miss this show, even if you are not a huge fan of these guys you should really check it out for a real fun show with some of the best gungings this season so far!

Grudge Match 1 Football Vs Rugby: This show features the first of a new feature, Grudge Match. A topic with two opposing sides with each model arguing for one side. We then run a twitter poll to get the results. In the first Grudge Match we asked which is the better sport, Rugby or Football? The sport with the highest polling wins the argument and the loosing side is sent into the Gunge Tank. Here we had Ash, who is a huge Arsenal fan, representing football and Kyle, who played Rugby at Uni, representing Rugby. Before we announced the results we gave Ash and Kyle the chance to have their final say on why their sport is better, then it’s results time and off to the Gunge Tank. Oh, and of course we dressed Ash and Kyle appropriately!

Football’s Revenge: With Football loosing out in Grudge Match we gave Ash the chance to get his own back on Kyle and that Rugby kit with this on the day planned game, much to Kyle’s disgust! So how well does Kyle know the rules of Rugby? In this game we find out. Ash is armed with Gunge blasters and a tank full of gunge ready to take his revenge for himself and the sport of football!

The Buzzer Round: A general knowledge quiz between Ash and Kyle. This time they have to buzz in if they think they know the answer. The person with the most correct correct answers escapes the gunge and send the looser into the Gunge Tank!

Pass the Pie: Both and Ash have be pied a quite a few times since they started to shoot with us, Ash clearly has the higher number going into this round of pass the pie. Question is, will he continue to add to that tally or will he pass a few Kyle’s way? Both Ash and Kyle are in the tank, both taking questions in turn. If they get their question right they can pie their opponent, thus passing the pie or if they get it wrong they get their own pie. The person with the most pies in their face at the end of the game gets a tanking!

Kyle’s Protest Finale: By this point, Kyle has been dropping subtle hints and being playing up to the camera that he is not happy that although he won Grudge match he was not happy his perfect Rugby kit got trashed for not knowing the rules of the sport he loves. So we decided to test Ash’s knowledge of Footy in this finale game that features a gunging that ends this show off perfectly!

More On The Splat! Fan Club

Check out the Gunge Tank Cam footage from Ash Vs Kyle

Ash And Kyle Also Shot The Following At Their Splat! Show Shoot...

It's our resident Splat! Stars from seasons 14 - 17 Ash and Kyle. Who will the viewers vote for to get the instant Gunging in The Gunge Tank? 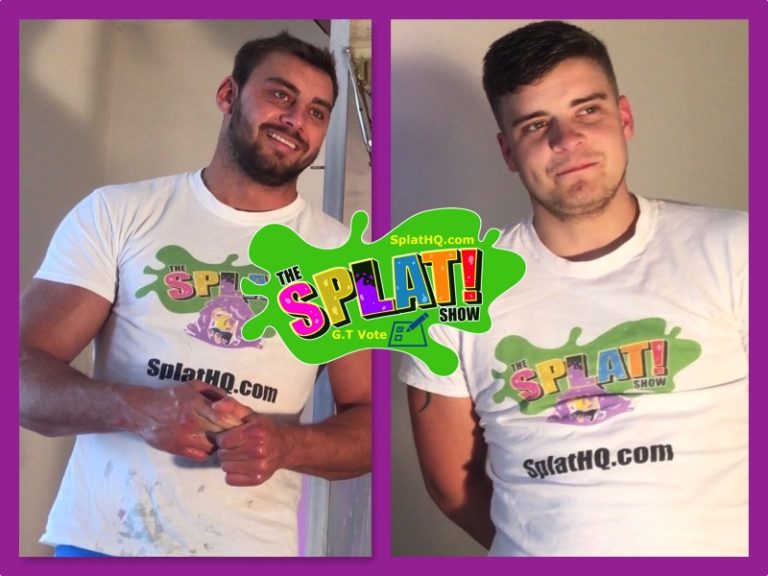