Not So Horrid Henry 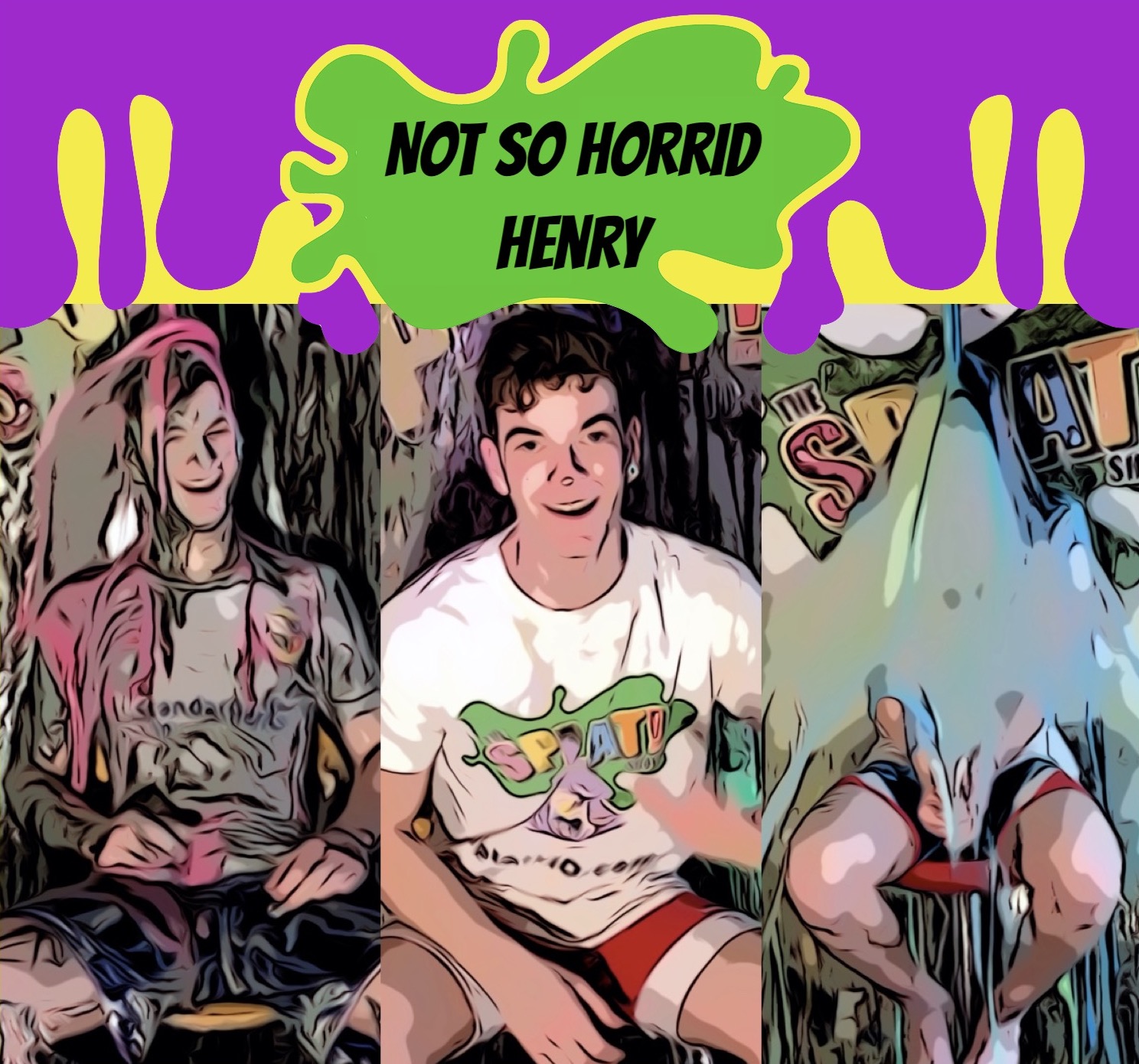 We interrupt the Splatting of UK Reality Stars to bring you another brand new contestant! We initially made contact with Henry two years ago and reconnected with him earlier this year to book him on the show. It’s a shame we didn’t get Henry on sooner because he is a total fire cracker!

Actor, singer, stage actor, model and all round joker, Henry is yet another classic Splat! Show contestant. He instantly got into the Splat! Show spirit and helped us create one of the strongest shows of the season so far, and after the fantastic start to the season we have already had thats something Henry can be proud of! No sign of Horrid Henry here!

Thanks to James (Fitgeek_UK) for helping with this show.

When we say Henry is talented, we REALLY mean this guy is talented. Oh, and he is very funny too! Henry instantly gets into the Splat! Show spirit joking with the hosts while telling us about his life and how he ended up on The Splat! Show. At the end of the show we give Henry his first Gunging of the show. Henry smiling during the Gunging? You bet! He loves it!

Henry’s next game is Foam Me Up. A game that was introduced during our last season and is now our official game for season 16! For each incorrect answer that Henry gives us we foam him up. When his body is covered in foam and is no longer the Henry we recognize the tank will release and dump a contrasting shade of gunge all over Henry. Again, laughs and banter are flying during this game from our Henry.

Henry is a singer, and a very good singer at that. So we had to play Gunge Tank Karaoke with him. We gave him the chance to avoid the mess while he sang IF he managed to get through one song without messing the words up. He failed so had to do another song while enduring a Splat! Storm like splatting from the foam cannons and Gunge blasters. Did Henry’s singing save him from the tanking? He is good but not good enough for our Gunge Tank it seems. The tank is the harshest critic.

A Spell In The Tank

A new quiz for a new season.  He can’t escape totally clean, but if his luck holds out he might escape a full blown tanking.  Gunge blasters if he’s wrong, pies if he’s right and a four letter word stands between Henry and the chance to get out before the gunge is released…

At the the end of show we sit Henry in the tank for the wrap up interview in the Splat! Show Debrief. We talk to him about his Splat! Show experiences and what he enjoyed (alot) and didn’t enjoy (the showers) before giving Henry his final Gunging of the show.

Henry was a pleasure to work with and we really hope you enjoy his fantastic show! 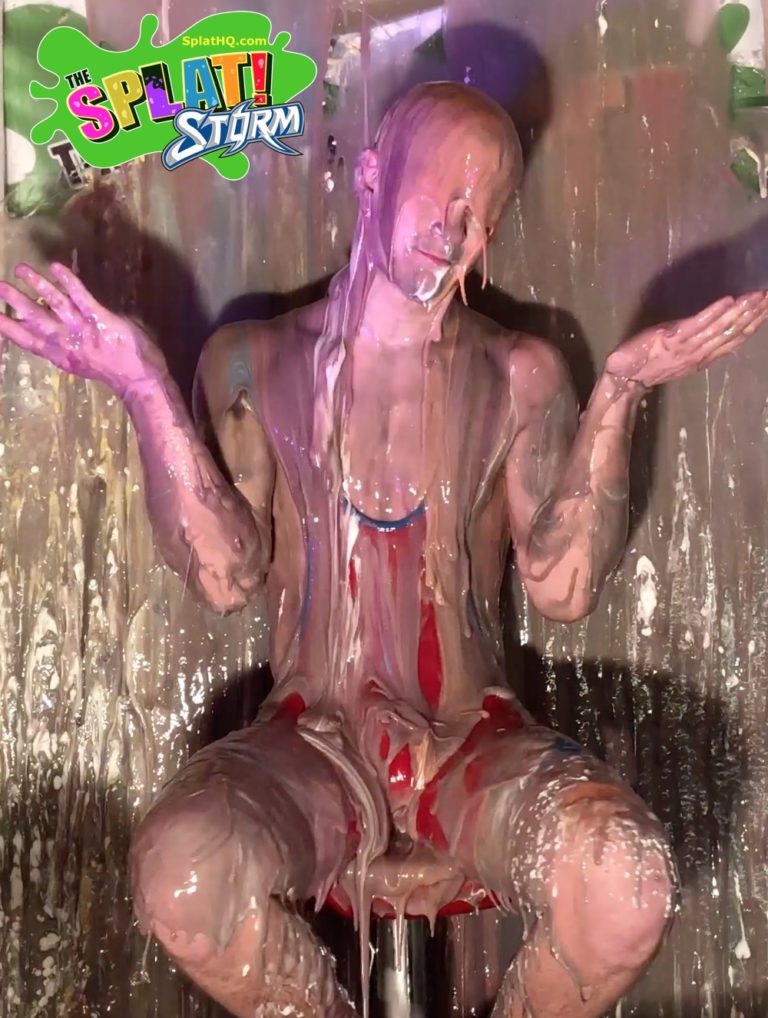 Henry took on our famous Splat! Storm. The Splat! Storm is a relentless deluge of gunge from all directions. Gunge blasters, foam cannons, bucket throws and tank drops. There is nothing quite like the Splat! Storm. Running time: 8 mins 2 secs. Presented in HD and 4K. Video download plays full screen in 16:9 ratio.

It was Henry Vs Connor in the Gunge Tank vote. Connor was sent to the Gunge tank after polling the most votes and instantly gunked. Henry however completely failed at the Gunge Tank escape and was also tanked! 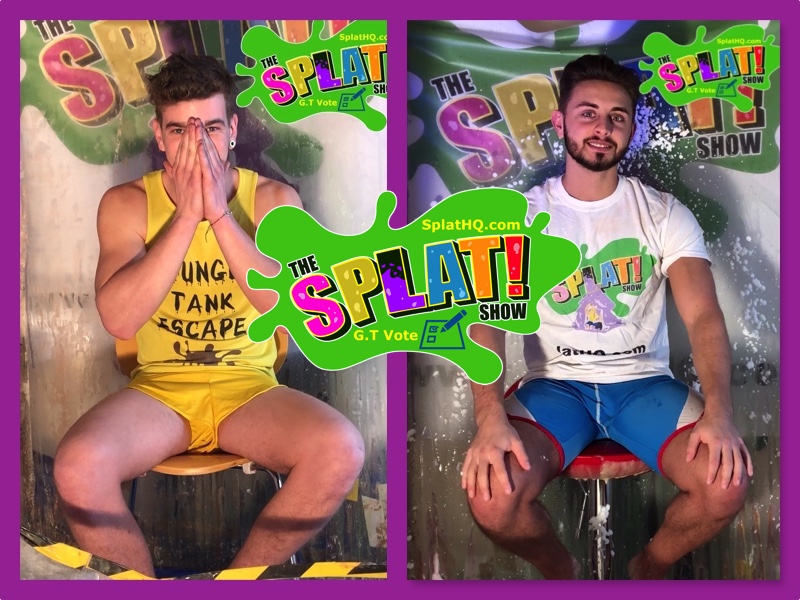 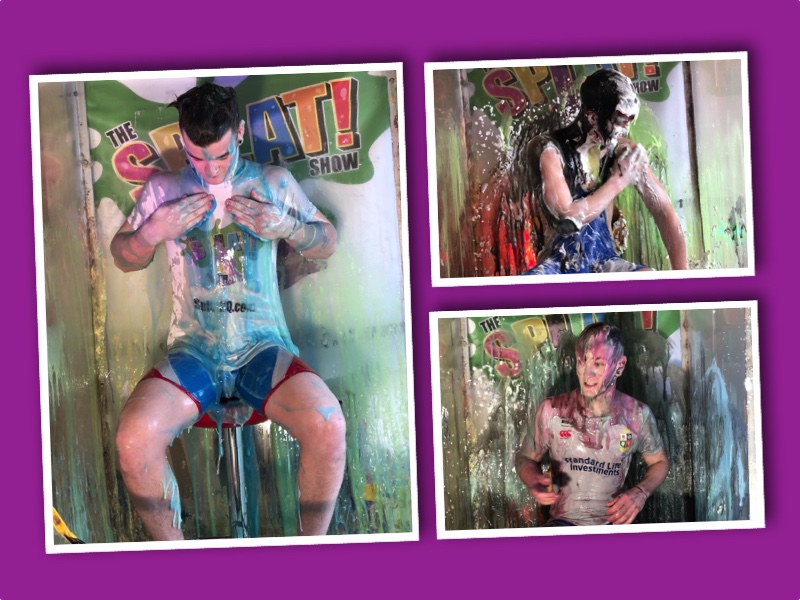 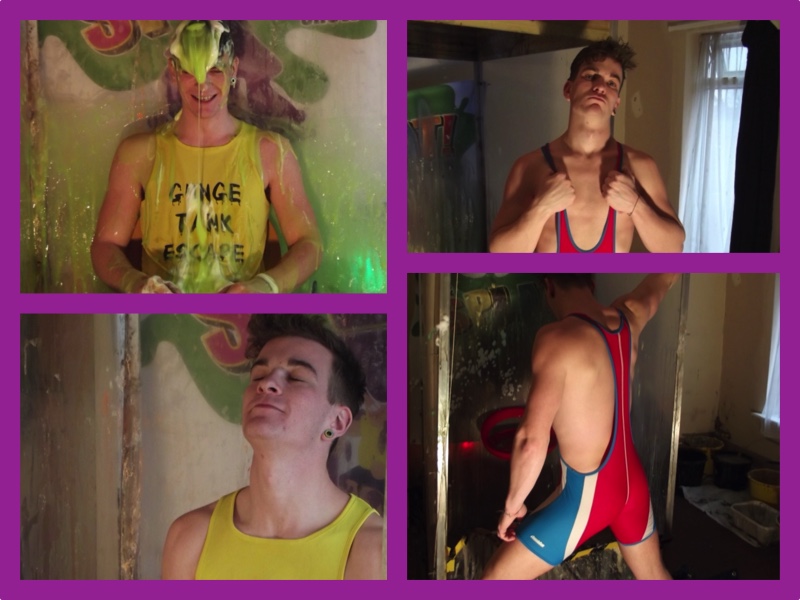 In case you hadn’t noticed, it’s been snowing recently.  So that meant February wasn’t exactly shoot heavy for Splat… and March has been left as a very full month! Ahead there are some returning faces but today was (technically) our 7th new face of the season… and he’s already on our “we have to bring him back” list.

There isn’t such a thing as a standard splat shoot.  Along with Henry being an unknown quantity we’ve got one new game to try out and a reworking of a splat regular along with storms, interviews and lots of foam.  There’s a real buzz at HQ about this one though, somehow we both get the feeling it’s going to go well.  When Henry arrives… yeah we KNOW this is going to be a good shoot. Along with being seriously good looking (we later agree that the photos that were used to publicise him didn’t do him justice) he’s got a relaxed manner about him that means within minutes of the shoot starting it’s like he’s a legacy model.  He has no pretentious airs around him even though he’s got a majorly impressive CV behind him already, he instantly gets the tone of the shoot and instinctively knows what Splat and the camera wants and, by the end of the shoot he’s even helping shift buckets around to help fill the tank. At one point I did want to ask Pete if this was some kind of set up but nope, Henry is just one of those people who is beautiful inside and out.
Now I don’t want to spoil too many surprises in the shoot so yes I’m going to tease a little.  I suggested to Pete a new take on one game.  TECHNICALLY it has better odds for the model to stay clean…. but I don’t let mere technicalities get in the way and I’m happy to say that the new take seemed to work well and Henry gave the reaction I was after when he realised…. No. I can’t say what he realised but I’m very happy with what we got out of him.
If you’ve never watched on the live feed… oh man you really missed out today.  A few models do the game, shower, do the next game…. and then we get guys like Henry who really love talking and giving us an insight into their personalities.  It makes our job so much easier and it meant his interview could have gone on so much longer.  So many things were hinted at off camera that live feed viewers will have heard (oh and seen…. he LOVED the live feed) that we could probably do half a dozen shows about him! Plus of course it gave us ideas to work into the other games.  What you’ll see on camera really wasn’t planned or in the script but he played along with everything we suggested like a Splat pro.
That’s the other joy of the splat shoots… Pete is really flexible.  Yes we have a script with the games etc but if something happens that means one game has to be reworked at the last minute, we rework it.  I’m saying this because you’ll hear us mention a game that doesn’t seemingly get played.  My bad…. I picked up a prop for a game that turned out not to be as the packaging indicated.  Pete just shrugged his shoulders, let me wildly improvise and the result was a game which actually had me holding my breath as it went down to the final question and even I didn’t know if Henry would escape unscathed or not.
In another blog I’ll talk more about the behind the scenes stuff but for now I’m going to leave it as “Damn, that was a GREAT day”. I’m exhausted, I’ve not eaten since breakfast… but I’m unbelievably happy and I really hope we see more of Henry in the future.  Not just on Splat but on the stage and the screen because the guy is seriously talented.
That didn’t stop us seriously SERIOUSLY gunging him though 😉
Translate »